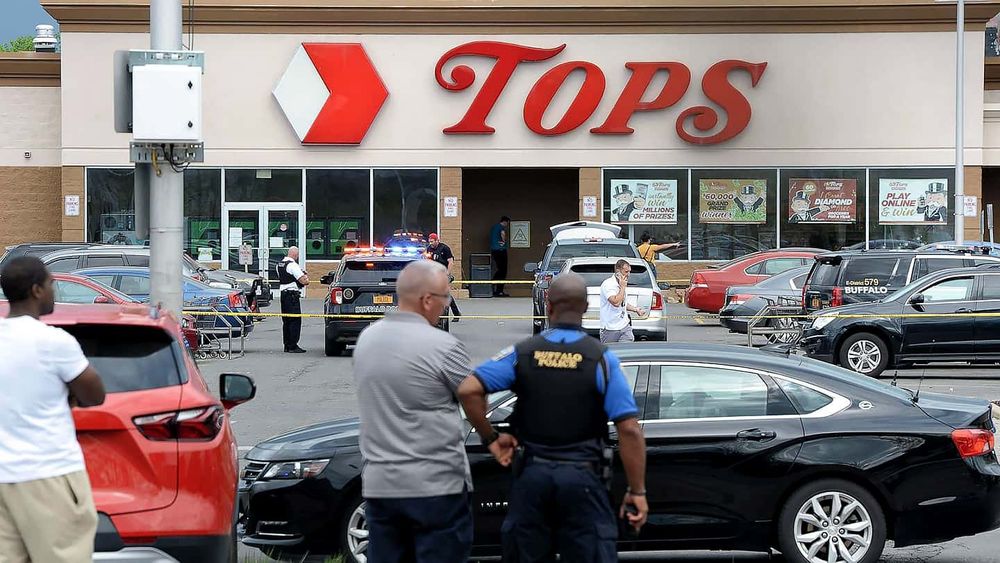 Alex Jones predicted the white supremacist false flag mass shooting at a grocery store before the election to stoke hatred and chaos in America.

How many flags could the CIA false if the CIA could false flags?

As the ‘official story’ goes - last night a man opened fire at a supermarket in Buffalo, New York while live-streaming on Twitch, killing at least 10 people and injuring several others. He also posted an online manifesto in which he described himself as a white supremacist.

This situation has all the earmarks of a standard Deep State false flag - racist shooter, live-streaming on social media, questionably written manifesto, symbolism at the scene, calls for gun control, and political timing of the event. I wouldn’t be shocked if this shooter happened to be a patsy that was mind controlled by a shadow government group to carry out this task. Let’s take a look at the red flags surrounding this shooting that indicate it could be a planned event:

When it comes to Deep State false flags, mass shootings included, they always seem to take place when it’s most politically convenient for the perpetrators. No doubt them Deep Staters are looking for any distraction they can get right now with how many walls are closing in on them - we’ve got Michael Sussman’s case as part of Durham’s investigation that starts Monday, the 2000 Mules documentary is exposing election fraud en masse, Russia is bringing out more allegations of U.S. Biolabs in Ukraine, & a whole lot more is going on, too. To misdirect our attention away from these things we have this mass shooting in New York, we have Congress holding it’s first open hearings in 50 years about UFOs on Tuesday, and we’ll see what else they try to throw our way in the coming days! (Death of prominent Deep State asset imminent? How are Queen Elizabeth and the Pope feeling?)

Big surprise, they’re telling us that this shooter was a crazy white guy who was apparently incredibly racist and anti-semitic. (Weird that he’s supposedly super racist, when a handful of his shooting victims were white people.) We don’t hear anything about the mass shootings that take place in crime-ridden cities like Chicago, but when an event happens that’s perfect to push agendas with, it’s front page news instantly. Division is the name of the game for our social engineers.

Another big surprise, the shooter was using an AR-15 style rifle when he carried out the attack and it took less than 12 hours for major media platforms and corrupt politicians to call for gun control afterwards.

Good ol’ Problem/Reaction/Solution, a.k.a. the Hegelian Dialectic. The Deep State creates the problem (manufacture a shooting incident), the public reacts in the predicted, intended way (omg all those MAGA people are racist and violent! We have to do something about guns!), and the pre-planned solution is rolled out to the public. (gun bans, more censorship, media hit pieces against muh conspiracy theorists questioning the attack).

And not only will this event spur calls for gun control, but since the shooter happened to livestream on a social media platform and posted a written manifesto to go along with the attack (or maybe his handlers wrote and posted for him, who knows) then Big Tech will of course call for more censorship as well. They usually go after a few birds with one stone when it comes to their false flags.

Seems to be the new hit thing when a shooter carries out an attack these days, he puts out a manifesto on social media! Our Buffalo shooter released a 180 page manifesto before carrying out his attack yesterday, complete with graphs and charts and statistics and his life story. 180 pages. I’m gonna go with, “he didn’t write that” for $500, Alex. I wonder which FedBoi was hired to write this for him? In fact if you look closely, whole pages of the manifesto from the Buffalo shooter was copy and pasted directly from the manifesto of the Christchurch, New Zealand shooter. It’s the exact same. I hope they aren’t paying these Fedbois top dollar because they aren’t doing a very good job covering their tracks!

In what might the most hilarious part of this scam-ifesto, the Buffalo shooter claimed to post pictures of himself. Here’s a screenshot from the manifesto and pictures he posted:

I saw these photos and thought, where have I seen that guy before? Ran a quick reverse image search through Tineye and came to realize that these photos are actually of comedian/troll named Sam Hyde. Since 2015, Hyde has been misreported numerous times as the perpetrator of shooting attacks.

Whoever wrote this manifesto, whether it was actually the shooter, Fedbois, or someone else, they are clearly trying to troll us with those photos. Do they think we won’t pick up on this? I would think they would expect us to. Regardless, something weird is going on with this manifesto. It’s almost like it was quickly and hastily put together at the last minute, probably like this whole manufactured shooting.

”When the Deep State buys their false flag from Wish.com”

In what might be the most apparent detail that exposes false flags for what they are, the symbolism surrounding these events will stick out like a sore thumb when you familiarize yourself with what symbols they use and how/why they use them. Whether it’s Freemason symbolism, false flags happening on numerologically significant dates (9/11, 7/7, 3/11, etc..), or other symbols plastered around the crime scenes, it’s a tell tale sign that something deeper is going on with the event.

One issue with this Buffalo shooting that shows pure contradiction in mainstream media narratives is that they’re calling the shooter a white supremacist Nazi due to the Black Sun symbolism in his manifesto - the problem here is that this Order of the Black Sun symbol, which is an actual Nazi symbol dating back to their secret societies of the WW2 era, is used by the Azov Battalion in Ukraine.

The Azov Battalion that Putin is fighting. The actual Ukraine Nazis. The Nazis the media says aren’t there or aren’t a problem. The Nazis that the Biden Administration is working to fund with money and support with military equipment. Maybe those rifles the Biden Admin is sending to Ukraine will be used in a mass shooting on U.S. soil someday? Maybe that’s what they want to happen?….

Another glaring symbol used in this shooting brings us to another connection with the Christchurch, New Zealand shooting of 2019. This Christchurch shooting was clearly a false flag that they used to justify advancing gun laws in New Zealand and that Big Tech used to basically shut 8chan off of the internet for a while. 8chan was where Q was posting at the same and where many citizen journalists were congregating to share info and expose the New World Order. They claimed the shooter posted his manifesto on 8chan and that the website radicalized him. They were targeting anons, citizen journalists, and Q with that shooting. (Also, there were connections found between the Christchurch shooter and that Ukrainian Azov Battalion. The Democrats are supporting the Nazis that are committing these shootings. What a mess.)

So this Buffalo shooter had many of the same symbols on his gun that the Christchurch shooter did! We’ve got the hash marks:

We also have the “14” and the “Fish” symbol used on both guns. The number 14 is somewhat commonly used in Neo-Nazi circles, and it also has meaning within the Illuminati cultists too. (Many of these Deep Staters are secretly Nazis)

You might be familiar with the infamous photo of John Podesta with the 14/Fish symbolism written on his palms. Remember when John Podesta was in New Zealand only days before the Christchurch shooting happened? It’s almost as if he traveled there directly to give the go orders for it, and these Deep State Illuminati Cultists communicated to their friends that they were behind it with the chosen symbols on the guns. (John Podesta is in Durham’s crosshairs right now, so it makes sense that him and his friends are wreakin havoc and trying to misdirect the public’s attention away from Durham’s case)

Plus these Deep State NWO folk have their own weird religion that they stick to, and who knows what the heck their weird belief systems involve.

This 14/Fish symbolism also shows up with one of John Podesta’s friends, a woman you may have heard of who goes by the name Ghislaine Maxwell. Back in 2015 the U.N. came out with 17 of what they called "Sustainable Development Goals", and the 14th goal had to do with the oceans. Ghislaine Maxwell had a company called “TerraMar” that was also involved with the oceans, and Ghislaine/TerraMar were partnering with the U.N. on these "Sustainable Development Goals". I find the 14/Fish example here to be quite curious. May have been no accident.

What does the 14/Fish symbolism mean and why is it plastered on the guns used in these false flags? Well it will be tough to know for sure as they are secret codes they are using within their own little cult. The meaning behind symbols comes from the intent of the user, and knowing their actual intent behind the usage of symbols can be tough to gauge. We can do educated guesswork, though.

One theory is that the 14 + Fish symbolizes aspects of the religious belief of these Illuminati folk. The claim here is that 14 + fish references the power of black magic and resurrection. There could be more specific meanings that we aren’t aware of.

As we head into times where the Deep State will continue to get exposed and get put on the ropes, their desperation and desire to cause chaos will surely increase. While I do believe that their power is waning dramatically from where it was 10, or even 5 years ago, I don’t think we’re out of the woods just yet. This is no time to become complacent. Keep your head on a swivel, be vigilant, and do not give up in this information war. The sooner we collectively wake up to the agendas and mass mind control of the New World Order, the sooner we can rid this world of their corruption and start building society anew.

Keep fighting for truth and justice!