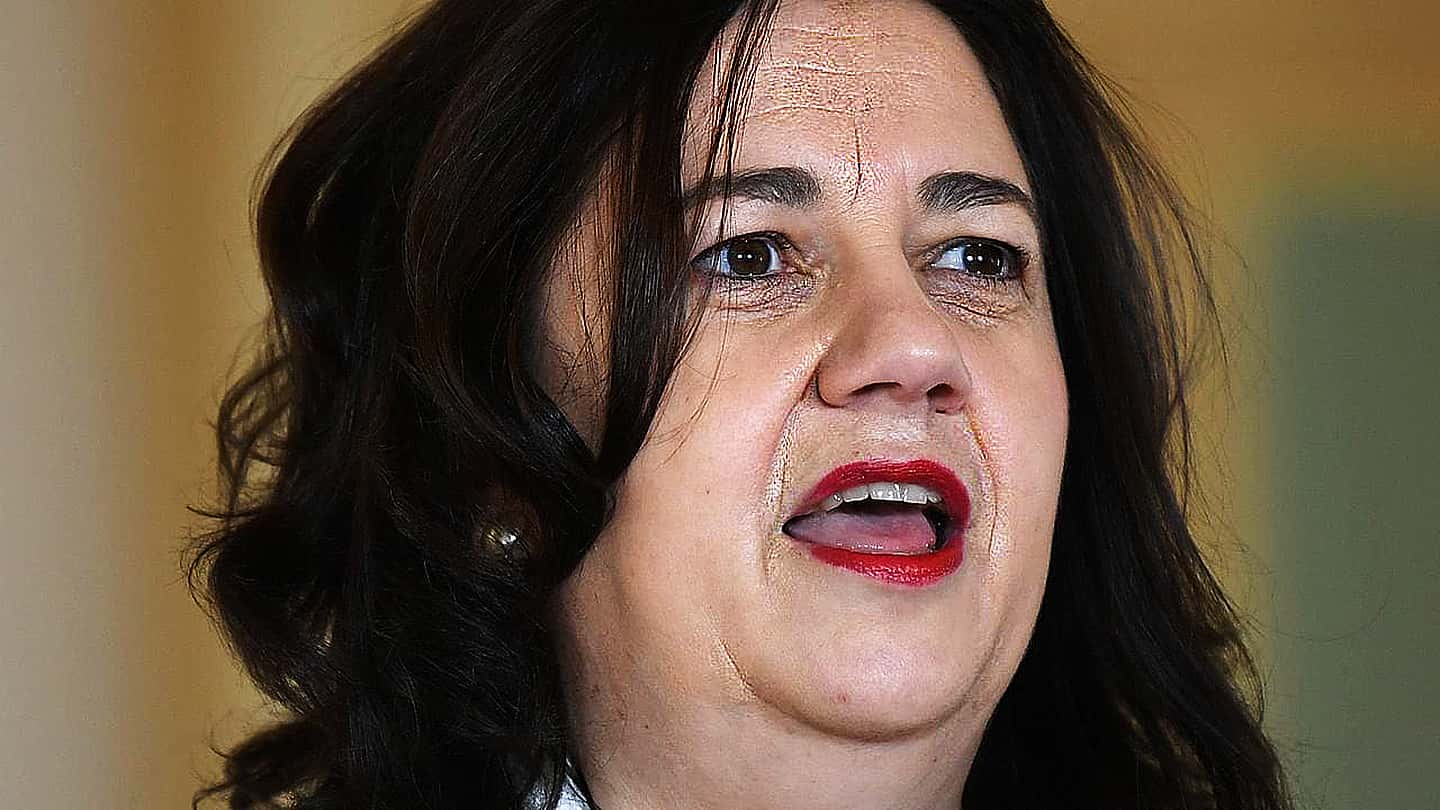 Where is your heart, Anna? Devastated son breaks down in tears over being unable to enter Queensland to see his dying dad - as she costs her state millions by shutting border to Sydney AGAIN

A devastated son has broken down in tears after being refused entry to Queensland to see his dying father, despite being fully vaccinated.

Mark Kilian and his wife Anneli flew from Los Angeles to Sydney on June 15 after the federal government and NSW Health granted them a travel exemption.

But when the Kilians tried to leave NSW on a $15,000 private charter plane, they were refused a quarantine exemption by Queensland Health officials.

Mr Kilian's 80-year-old father Frans weighs just 44kg and is dying of pancreatic cancer in a hospital on the Gold Coast.

Queensland Health has rejected the couple's quarantine exemption application four times even though they are both fully vaccinated against the virus, have tested negative to Covid-19 three times and offered to wear hazmat suits and tracking devices during their visit.

The heartless decision came as Premier Annastacia Palaszczuk on Wednesday announced Queensland will be closing to seven local government areas in Sydney.

From 1am on Thursday, Queensland will ban residents from the City of Sydney, Woolhara, Bayside, Canada Bay, Inner West and Randwick council areas.

Mr Kilian told Karl Stefanovic on Wednesday morning's Today Show that all he wants is to say 'I love you' to his father one last time.

'We just want to be there for those last days, moments... That's all we want. That's all that all of this is about,' he said.

'I don't think we have ever experienced anything like this in our lives. It has been on a personal level absolutely tragic for our family.

'To be locked in a room in Sydney when all it would take is just the show of compassion by [The Premier and the Health Minister of Queensland] that could change the entire trajectory of a family's experience of the last days of their family, it is inconceivable that they would not allow that.'

Mr Kilian said it was a sign of hope when, on Tuesday, Ms Palaszczuk addressed the situation directly when fronting the media.

'That is at least a development. And then we also got a personal letter from the Prime Minister giving us his compassionate support but also stating that the Federal Government has no ability to affect the state law,' he said.

'Meanwhile, the Premier of Queensland basically said the opposite. It is a little bit of a passing the buck situation. But at least there is movement.'

Stefanovic called for 'humanity to prevail' and said he hopes Mr Kilian can hug his ailing father one last time.

'The rules that are designed to protect us should never really outweigh our ability to show compassion, surely,' he said.

'We have got to have faith in those things and try to open up to getting back to normalcy and being able to show compassion, say goodbye to loved ones.'

The mounting media scrutiny prompted Ms Palaszczuk on Wednesday to offer a compromise on the situation.

'This is a matter for the New South Wales Government, if they want to break the 14-day mandatory quarantine for this couple, and if can provide Dr Young with how they will safely be transferred from Sydney to the Gold Coast, we, of course, will do everything we can to facilitate the reunion with his father at the earliest convenience,' she said.

'I know that the Queensland and federal officials are in a bit of a no-win situation because if you say yes to this, then where do you draw the line. But on the other hand, common sense is common sense,' he told Stefanovic.

'I just want someone to be able to say goodbye to their parent. As a country, we are surely smart enough to put them in a special transport van and you know, the technical experts could come up with a solution.

'For everyone who has been through Covid, rather than worrying about how everyone else will react, I reckon at least 5million Melburnians would say give them a chance to say goodbye.'

Mr Shorten said he can relate to what the family is going through after his own mother passed away in her sleep.

'I don't want them to have to go through what I went through. So when I see this family who are in this experience, there must be a way to facilitate them saying goodbye,' the former Labor leader said.

In an emotional video taken from his hospital bed, Frans made a tearful plea with Palaszczuk to let his family into the state to say their goodbyes.

'Every day that they are in that hotel, is a day less that I have with my son and daughter-in-law in my last days,' he said.

'Please Queensland Health. Show some compassion. And help an old man see someone before it is too late.

'By all accounts, there is no danger to the Queensland community. I'm asking you, begging you actually, to let my son and his wife leave their quarantine to come here to be with me. It is my dying wish. Please.'

In a moving letter sent on Tuesday, the prime minister apologised to Mr Kilian for the 'challenge' his family faces and admitted he is disappointed in the Queensland Government.

'I recognise that you and Anna have done everything you possibly can to see your father,' the letter started.

'I know what an important time this is for you and you can never get these days back. I am disappointed the Queensland Government has not found a workable and compassionate solution.

'However, the Australian Government does not have the authority to step in and provide exemptions from hotel quarantine for travel into Queensland. Under our federation, these decisions are made by the Queensland Government.'

Mr Morrison said he understood the tough time the family are going through after his own father died early last year.

'I know how important these times are to families. It is why the Department of Home Affairs provided an exemption for you and your wife Anneli to enter Australia,' he wrote.

'Again, I am so sorry for what you are facing.'

Ms Palaszczuk on Tuesday acknowledged what the Kilian family are going through is 'absolutely tragic' but said she was following national guidelines on hotel quarantine.

'If the Federal Government wants to talk to both states, I'm happy to facilitate that,' she said.

'My heart breaks when I hear about stories like this. New South Wales has always tried to have a compassionate approach especially when there are circumstances such as this one,' she said.

'I just ask all of my colleagues to think carefully before preventing families from being united at a very difficult time.'

Mr Kilian said his father's condition deteriorated rapidly 'where we knew we needed to get on the next plane we could'.

They were granted exemptions by federal authorities and the NSW government to fly from LA to Sydney, but once they tried to travel across the border, Queensland Health said no.

Ordinarily, the couple would have to complete two weeks of hotel quarantine, but it is feared the beloved dad will not survive that long.

'Every time we call him, the first words out of his mouth are 'when are you coming?' Ms Kilian said.

The couple remain in hotel quarantine in Sydney and have been rejected four times by the Sunshine State who offered 'cold-hearted responses time and time again'.

'Our sympathies are with the family however these are clinical decisions that are necessary to keep Queenslanders safe,' Queensland Health said in a statement.

With time running out they have pleaded with the Palaszczuk government for an exemption on compassionate grounds - offering to charter a private jet, wear hazmat suits and even tracking devices.

'My father is an Australian citizen. He is one of their constituents. All he is asking is that he has the opportunity to say goodbye to his children, his son and his family and that we can all be there for that last moment,' Mr Kilian said.

'We are watching him fade away. His heart is also broken because he was hoping to see us.'