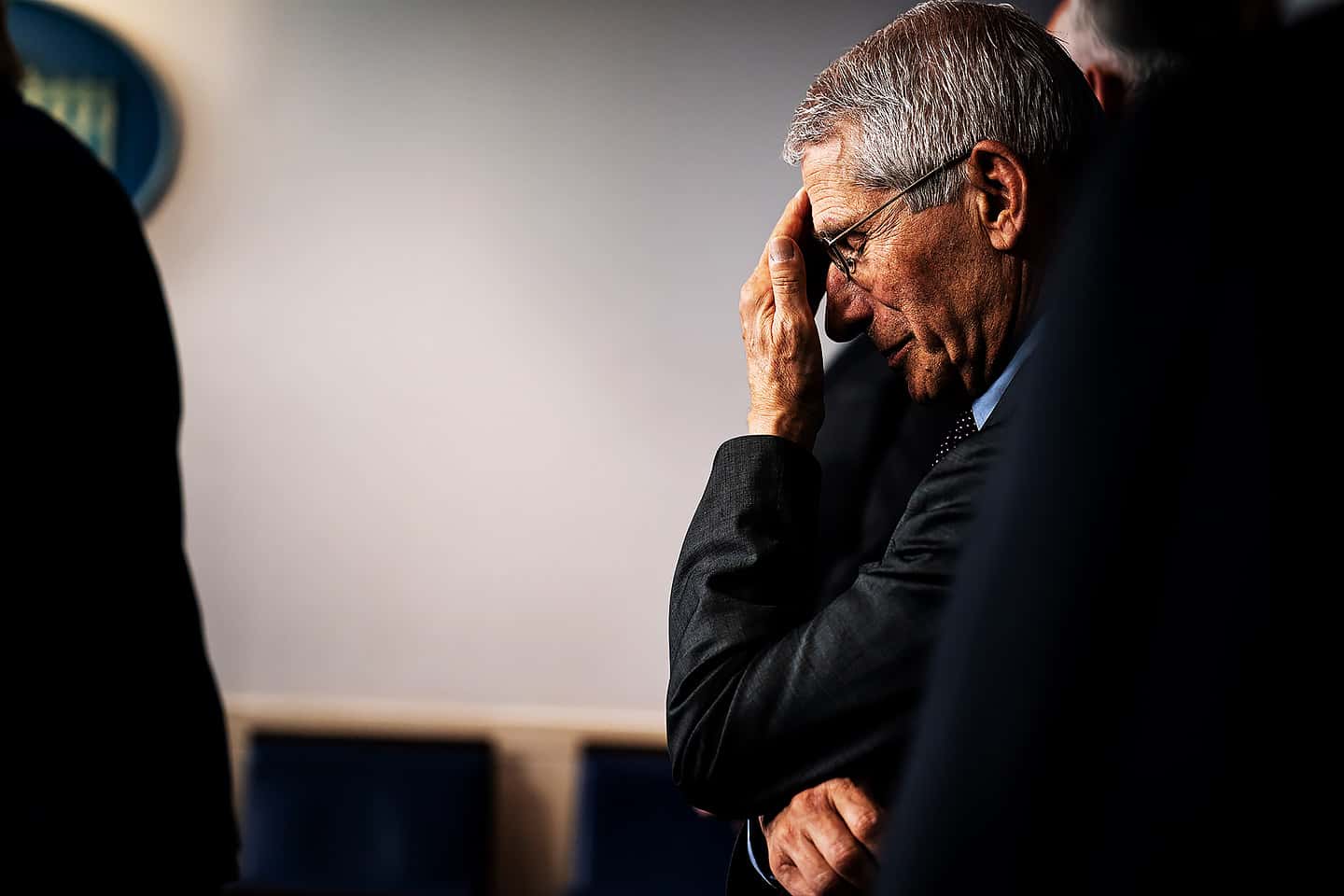 A report from Natalie Winters at the National Pulse reveals that in early 2021, the Wuhan Lab deleted information connecting Dr. Anthony Fauci to gain of function research.

They also scrubbed the National Institutes of Health as a research partner.  This comes after Dr. Fauci denied any connection last week (see video below) during a heated exchange with Senator Rand Paul.

Archived versions of the Wuhan lab’s site also reveal a research update – “Will SARS Come Back?” – appearing to describe gain-of-function research being conducted at the institute by entities funded by Dr. Anthony Fauci’s National Institute of Allergy and Infectious Diseases (NIAID).

The connections to the NIH were scrubbed from the Wuhan Lab website in early 2021, leaving just two research partners. One of the partners is EcoHealth Alliance, run by long-standing Chinese Communist Party-partner Dr. Peter Daszak.

Our previous report on Dr. Peter Daszak (see below) exposes him for being involved in the gain of function research with the Wuhan Lab.

The evidence has become too large to ignore. Senator Rand Paul is like a dog on a bone right now to try and get to the bottom of Fauci’s involvement in the origins of COVID-19. Last week, Senator Paul got into a heated exchange with Dr. Fauci, who denied any involvement with the gain of function research. Watch below as Senator Paul discusses his interaction with Dr. Fauci:

Senator Rand Paul spoke with Brian Kilmeade after he drilled Dr. Anthony Fauci during a Senate hearing about the pandemic. Senator Paul and Kilmeade touch on specific points where they say Dr. Fauci is lying. This is a potential powder keg that needs to be investigated and exposed.

During a Senate Health Committee hearing on COVID-19 today, Kentucky Senator Rand Paul pressed Dr. Anthony Fauci over the origins of the COVID-19 pandemic and whether or not the NIH has sent money to the Wuhan Institute of Virology (see details below).

Recent disturbing reports about Dr. Fauci’s involvement with the Wuhan Lab in China have surfaced. The reports implicate Dr. Fauci for being involved with producing the COVID-19 virus in the Chinese virology lab.

Fox News’ The Revolution host Steve Hilton unloaded on Dr. Anthony Fauci, telling his viewers that after the facts he is sharing with the public that reveal the origins of COVID-19, Dr. Fauci was “going to need friends in high places.”

Hilton explained how the influenza virus was injected from one ferret to another. According to Hilton’s study, ferrets have respiratory systems that are very similar to humans. About 10 years ago, scientists in Erasmus Medical Center in the Netherlands manipulated the virus in ferrets until the virus was mutated enough to be transmitted through the air. The “Gain of Function” virus research was born. The idea was to engineer the most contagious, deadly viruses in a lab to help us better prepare to fight them.

According to Hilton, Gain of Function virus research has been funded by none other than the National Institute of Allergies and Infectious Disease’s Dr. Anthony Fauci. The Wuhan Institute of Virology is one of the leading laboratories studying the COVID virus.

“Imagine if a deadly virus engineered in a lab to be incredibly contagious somehow escaped from a lab; it could wreak havoc—precisely because it was designed to do this—not by nature, but by us!” Hilton said.

“Gain of Functions research has always been highly controversial,” Hilton explained. The Revolutionary host explained that in 2014, the Obama administration placed a complete moratorium on this kind of research, “following recent biosafety incidents at federal research facilities.

“Despite the controversy studying this type of research, it always had one steadfast champion, a leading figure in the world of infectious diseases—Anthony Fauci,” Hilton explained. “His institute funded that first ferret study,” he explained, adding, “At the time, he co-wrote an op-ed in the Washington Post describing this research as ‘A flu risk worth taking…important information and insights can come from generating a potentially dangerous virus in a laboratory.'”

Despite the Obama administration’s ban on “Gain of Functions” research, Hilton explains that Dr. Anthony Fauci gave over $3 million over the course of six years to zoologist Peter Daszak (known as the “bat man”) of Eco Health Alliance. Daszak first discovered the bat origin of the SARS pandemic over a decade ago. According to Hilton, Peter Daszak himself subcontracted the “Gain of Function” portion of Fauci’s project to the Wuhan Institute of Virology.” Hilton asks, “The question is—did they give it to us?”

Hilton continued with his bombshell report.

“Let’s see what they did with the Fauci money,” Hilton says.

“Inside the projects result page, there are 13 papers co-authored by the head of the Wuhan’s Infectious Disease unit. One of the papers, published in 2017, and Zoologist Peter Daszak is listed as a co-author. Inside the funding section of that paper is the ID of the Fauci commissioned project,” adding, “That’s the money trail!”

“Until now, the only reporting on Fauci’s role on all this has been on the funding of the Wuhan lab in general,” Hilton continued, “Tonight, we can go further—thanks to this paper, we can see the specific activity that Fauci funded—and it’s terrifying!”

They collected samples of bat feces in a bat cave in China, Hilton explained, adding that they found novel coronaviruses in the bat feces, and then they infected human cells with them. Here’s the most important part, Hilton explained, “The genetic changes they made in the lab unlocked a highly specific doorway into the human body—the virus that causes COVID-19 uses that same exact same doorway!”

“Are we still funding this research? “ Hilton asked, as he explained that they reached out to Dr. Fauci, the NIA, and Peter Daszak and got no replies from any of them.

OUR RECENT REPORT ON PETER DASZAK:

In January of this year, the Wall Street Journal reported that a team of World Health Organization (WHO) researchers had arrived in China but would not investigate the possibility that the coronavirus originated in a lab. One of the researchers has been called out by the National Pulse for being compromised by his political leanings to the left.  Could favoritism toward China keep the researchers from digging deeper into the origins of the coronavirus in China?

The National Pulse reports that World Health Organization researcher Peter Daszak donated 71 times to Joe Biden’s 2020 presidential campaign. The donations to Biden all happened over a five-month period. The donations called into question the WHO and the media’s depiction of Daszak as a neutral investigator into the origins of the virus that caused the deaths of millions around the world. Is this researcher protecting China or just anti-Trump? Either way, this is dangerous censorship of information that the world should know the answer to ASAP.

Even worse, Daszak made several donations to an anti-Trump PAC called Really American. According to Open Secrets, the PAC spent nearly one million dollars campaigning against President Trump’s reelection. Most of the donations to the PAC came from a Canadian company that donated 27 times with over 200K.

The National Pulse reports that Really American repeatedly criticized President Trump’s handling of the pandemic to damage him politically. They went so far as to label the virus the “Trump Virus” and said,  “we #BlameTrump AND his enablers in the Senate for the worst pandemic response in the world.”  The group even suggested that  President Trump “doesn’t care” about deaths due to the coronavirus.

According to Taiwan News, a video taken just days before the start of the coronavirus pandemic on December 9, 2020, shows the researcher discussing the testing of modified coronaviruses on human cells and humanized mice in the Wuhan Institute of Virology (WIV), just weeks before the first cases of COVID-19 were announced in the city of Wuhan itself.

Daszak speaks about the coronavirus at the 29:52 point:

Interviewer: “So you say these are diverse coronaviruses and you can’t vaccinate against them and no anti-virals, so what do we do?”

Peter Daszak: “Well, coronaviruses are pretty good… you can manipulate them in the lab pretty easy, you know. Spike protein drives a lot what happens in a coronavirus. Zoonotic risk. So you can get the sequence, you can build a protein, and we work with Ralph Baric at UNC, a genius, insert into the backbone of another virus, and do some work in the lab, and you can get more predictive when you find a sequence…”

President of EcoHealth Alliance Peter Daszak spoke about his work at the nonprofit to protect the world from the emergence of new diseases and predict pandemics. Since 2014, Daszak’s organization has received millions of dollars of funding from the U.S. National Institutes of Health (NIH). It has funneled to the Wuhan Lab to research bat coronaviruses.

Since the airing of this video, the NIH has cut funding to Daszak.