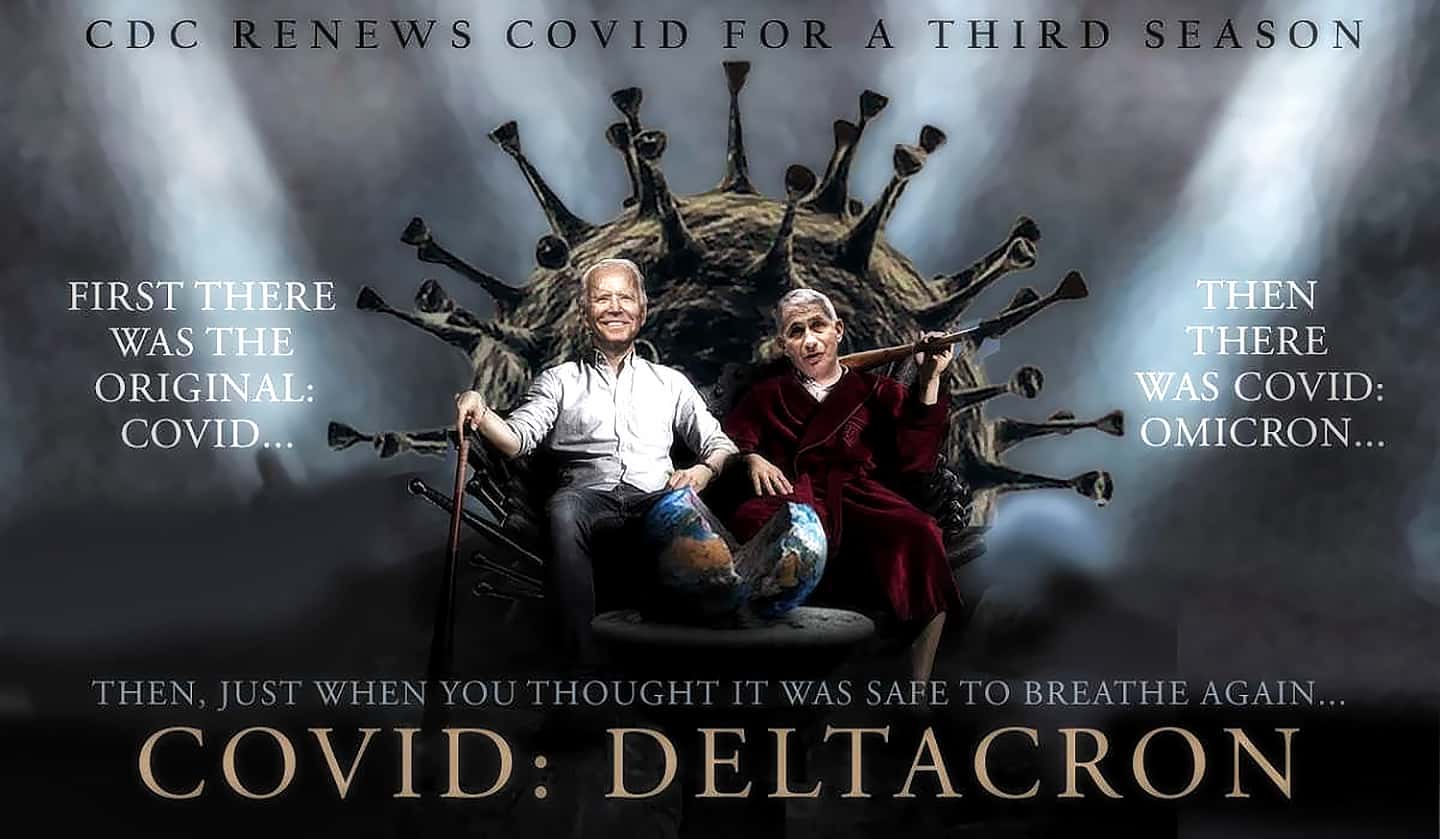 First there was the original: COVID...
Then there was COVID: Omicron...
Then, just when you thought it was safe to breathe again...
COVID: DELTACRON
The popular weekly horror / medical drama "COVID" has been renewed for a third season.  Starring Anthony Fauci as the lying anti-hero Dr. Needles and Rochelle Walensky as soulless bureaucrat Ms. Blankenslate, the show has been popular in the US and around the world since its first season in 2020.  It centers around the exploits of these two main characters as they conspire to gain fame and fortune leading the containment efforts for a mysterious virus called COVID.  The main symptoms are brain fog and the nearly complete loss of analytical reasoning ability.  Victims also experience a strong impulse to cover their face with cloth.

Season one nearly ended with the complete destruction of civilization, but the world was saved in the finale by the mysterious "orange man" who created a vaccine in his underground lab and rolled it out in the nick of time.

In the second season, the main characters have been trying to convince the world that another COVID outbreak is occurring, code-named "OMICRON."  It also brought a little levity with the introduction of "Ruprecht" - an old man with dementia who thinks he's the President of the United States, played by the well-known method actor Joe Biden.

The third season promises more political intrigue as another wave of disease hits the US, but no one seems to take it seriously.  This new threat has the rather silly name "DELTACRON", which might mean the show is starting to take itself a bit less seriously.

Deltacron was first reported in Europe in February this year and has since spread to the US, UK and now Australia.

Cases of the new Deltacron Covid strain have been detected in Queensland just hours after first appearing Australia.

Queensland Health confirmed on Friday that 12 people had fallen ill with the new strain.

It is not known how or where the cases were contracted.

Earlier on Friday, NSW confirmed one case of the new strain.

Deltacron is a recombinant strain, combining genetic material from the two most prevalent variants globally, Delta and Omicron.

It was first reported in Europe in February and has since spread to the US, UK and now Australia.

“Recombination usually creates a new virus that isn’t viable, as the mixing of different genes can interfere with the virus’s ability to make the proteins it needs to survive,” Biochemistry Professor Luke O’Neill told The Conversation.

“But sometimes one does survive, and that appears to be what’s happened with Deltacron.”

Queensland recorded 10,092 new cases of the virus on Friday, as well as nine deaths.

Studies are underway to determine the properties of the new hybrid variant.

“We have known that recombinant events can occur, in humans or animals, with multiple circulating variants of SARSCoV2. need to wait for experiments to determine the properties of this virus,” World Health Organisation Senior Scientist Soumya Swaminathan posted online.

“Importance of sequencing, analytics and rapid data sharing as we deal with this pandemic,” she tweeted.

Given that initial Covid symptoms are similar to the flu and the common cold, it has often been difficult to tell whether the onset of headaches, aching pains or cold-like symptoms are actually the virus.

The emergence of new strains make that detection even more difficult, as each variant cannot be specifically identified by at-home test kits.

A UK government study also recently investigated the top symptoms associated with Covid. The ZOE Covid symptom study found that the illnesses will slightly differ depending on whether you have been vaccinated or not, but that the main symptoms include headaches, runny nose, sneezing, sore throat, loss of smell and persistent cough.

However, the World Health Organisation has said Deltacron is almost as infectious as measles, and it appears to have similar symptoms to those of Omicron.