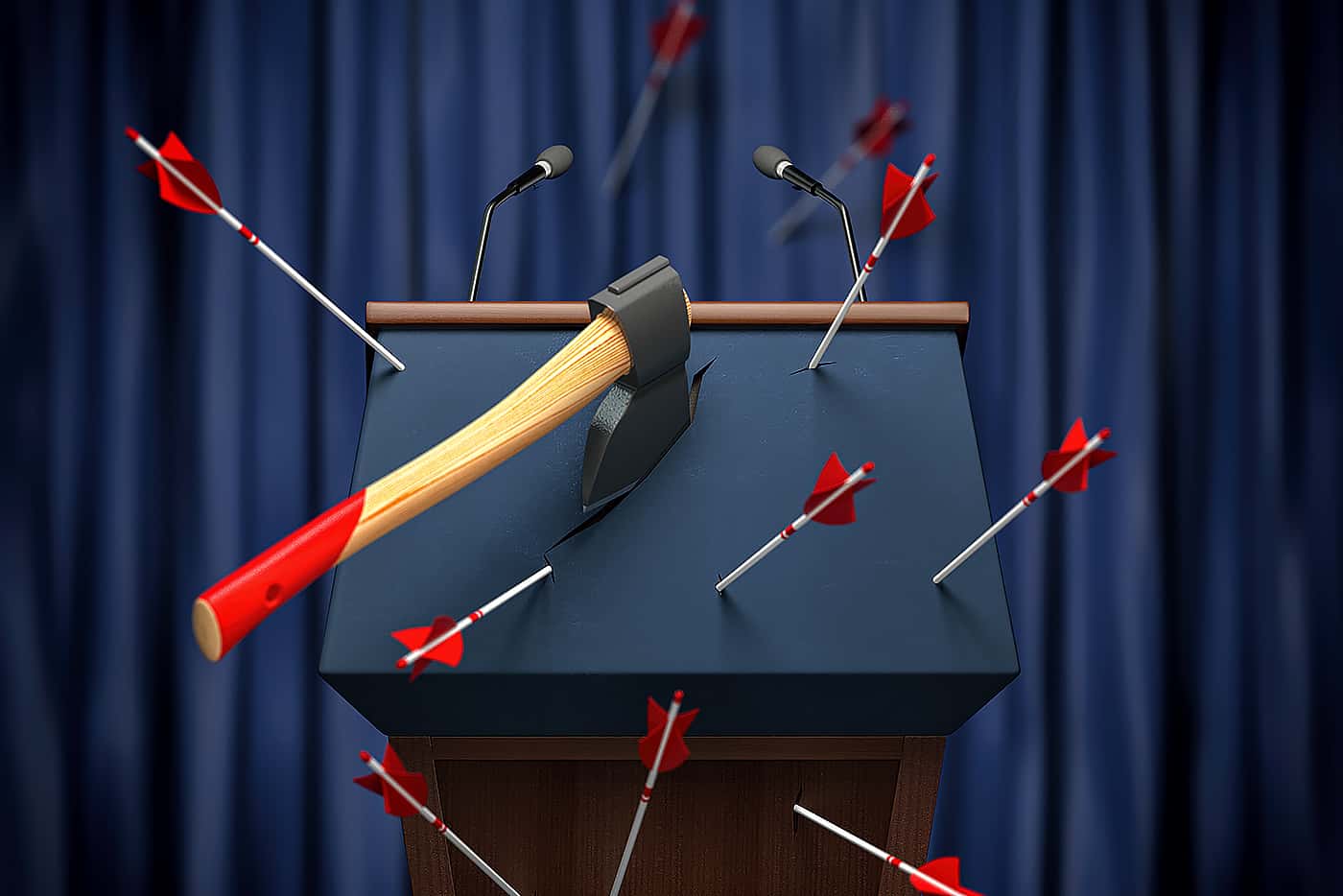 The biggest scandal to hit the Daniel Andrews government so far has just gone nuclear.

So-called “preferences whisperer” Glenn Druery has been exposed in a video boasting that he set up the “Restore Democracy Sack Dan Andrews Party” as a front group with which to funnel votes away from One Nation, the United Australia Party and the Freedom Party:

Mr Druery explains in one video that he charged $55,000 to minor parties for optimising their preferences in order to win seats in Victoria’s upper house.

He said he helped set up the Sack Dan Andrews party to draw preference votes away from other parties.

In a fuller video he boasts how he runs his business to practically ensure that the minor parties elected are ‘his guys’, so the Labor Party can deal more easily with the upper house to push its agenda through.

Mr Druery also said that the Labor government has been unwilling to reform the voting system because it currently keeps their opponents at bay.

“The conversation is: I want you to be able to govern and I will help you find a pathway forward. Of course if you announce straight away that you’re going to get rid of the GVT, the crossbench will become a very, very cross bench,” he said.

“The rest I control. Everybody … I’ve got more balls in the air than a vasectomy doctor.”

The “loophole” he exploits is Group Voting Tickets:

Victoria is the only state to still allow group voting tickets (GVT) — a system where parties allocate preference for voters who number the upper house ballot paper above the line.

It has led to complex and secretive deals between micro parties to harvest preferences in order to get elected with minuscule primary votes.

Pressure has mounted for a decade to reform this system without success, because it suits the Andrews Regime:

Across Victoria a record 22 groups are contesting a spot in the upper house.

The latter group, he said, includes Clive Palmer’s United Australia, the Freedom party and One Nation.

“With this group there’s been no big complex arrangement, where they all meet up in a room and decide who’s going to win in what region,” Raue said.

“It appears they’ve made one-on-one deals with each other.”

Rest assured that if parties which genuinely advocated for liberty, an end to Covid Tyranny and for giving Australians a voice regarding replacement immigration utilised Group Voting Tickets more effectively, the system would be reformed in a microsecond.

Back to the main revelation, Druery’s setting up of the Sack Dan Andrews Party as a front group is clearly and deliberately misleading.

It is straight up fraud, it’s criminal.

As XYZ News has reported, the hatred against Daniel Andrews for Covid Tyranny is off the charts. It is completely reasonable to expect that a large proportion of voters would have voted for the Sack Dan Andrews Party because they want to sack Dan Andrews. This is unabashed voter fraud and it could very well decide the balance of the upper house.

The insane thing is, it doesn’t look like anybody is going to jail for this:

Glenn Druery, dubbed the “preference whisperer”, has made a business out of doing preference deals for minor parties in exchange for payments.

It is not illegal.

If only you knew how bad things really were. Guess who one of Druery’s clients was?

At the last election, Rod Barton from the Transport Matters Party was elected to the Eastern Metropolitan Region with just 0.6 per cent of the primary vote. The Liberal Democrats received a similar victory.

Rod Barton is the guy who let Daniel Andrews pass the Pandemic Bill in 2021, which allowed him to extend Covid Tyranny in Victoria for months, and could still be used to reimpose it at any time.

Glenn Druery isn’t simply gaming the system for profit, he is directly aiding and abetting the most corrupt and totalitarian regime Victoria has ever seen.

He is a key player in the system that allowed Daniel Andrews to do all of this:

There is a reason why Victorians, when they broke through police lines outside Parliament House during the lockdowns, did not storm Parliament itself.

They calculated that if all else failed, they would be able to vote Daniel Andrews out at the next election. November 2022 was a long way off, but people were prepared to wait.

What this demonstrates is that in Victoria, elections are just as fake and gay as they are in every other country beholden to the American Empire. A revolution is currently underway in Brazil (not that the Lying Press would tell you) with millions of people marching for days in protest against the rigged election which ousted their President Jair Bolsonaro.

If Daniel Andrews somehow manages to pull off a victory in the Victorian election on November 26, you can rest assured that millions of Victorians will view him as an illegitimate winner. If that happens they could make January 6 look like a picnic.

The Victorian election promises to deliver one of the most bizarre legislatures that Australia has ever seen. This is due to an electoral system in the upper house that is so easily manipulated.

Victoria is the only state that persists with a Group Voting Ticket (GVT) – a list of written preferences that parties instruct the Victorian Electoral Commission (VEC) to adhere to when distributing votes. This system enables micro-parties to be elected with fewer than a few hundred votes. At the last Western Australian election, when GVT’s still operated there, the Daylight Saving party was elected, despite only gaining 98 primary votes.

The prevailing system in Victoria is further complicated by a record number of 23 parties contesting the election, plus pre-poll harassment of voters by so-called ‘freedom parties’ and the Victorian Socialist party. The latter have bussed in thousands of supporters from other states and, in their all-black garb, have swarmed over polling booths, hectoring voters. This forced VEC chief, Warwick Gately, to issue a media release stating that he was ‘extremely disappointed by instances of poor behaviour by some party workers and campaign volunteers’. Gately said that ‘election staff, other volunteers and nearby traders feel unsafe or intimidated’.

However, the manipulation of votes and voters is centred on Glen Druery – the ‘preference whisperer’. He is yet again being allowed to game the system by promising to get micro-parties elected on miniscule primary votes, so long as they hand over their GVTs for him to manipulate. Druery has said that he could get up to ten micro-parties elected to the crossbench in the Victorian Legislative Council. With his $5,000 fee to ‘play at the table’ and his $50,000 success fee, Druery could walk away from this election with up to half a million dollars. Paul Keating famously called senators ‘unrepresentative swill’. But, by anyone’s reckoning, the likely line-up of micro-parties in Victoria’s upper house makes Keating’s claim an understatement.

Druery has admitted to other party organisers that he tried to register the Legalise Marijuana party in an effort to swing voters away from the Legalise Cannabis party, which attracted over five per cent of Senate votes in Queensland at the last federal election. Druery’s plot was thwarted when the Legalise Cannabis party secretary, Craig Ellis, checked out the registered Victorian address of the new party and found it was an abandoned house in suburban Reservoir!

By garnishing a sizeable part of an MP’s salary in return for getting them elected, Druery could arguably be in contempt of Parliament for unduly influencing an MP through having a financial lien on them. The Victorian Liberal party has now said it will refer Druery’s activities to the state’s Independent Broad-based Anti-corruption Commission.

Victorian MLC Fiona Patten is the widely known leader of the Reason party, formerly the Australian Sex party, for which I once stood as the lead Senate candidate in NSW. Patten is the only MP to try and stop Druery’s anti-democratic preferencing schemes. In 2020, she introduced legislation to make it illegal for a person to be paid by parties or candidates to collude in coordinating a GVT.

Druery is out to defeat Ms Patten, whose odds of being re-elected to her Northern Metro seat are 50/50. This is because Druery has directed preferences from all of his micro-parties against her. He is backing the newly anointed, anti-abortion DLP candidate – the former ALP branch-stacker, Adem Somyurek. The GVT preference flows show that the result will come down to a Patten v. Somyurek battle.

Further complicating this election have been the antics of the Animal Justice party (AJP), which notoriously double-crossed Druery. After the AJP’s preference coordinator, Ben Shultz, had met with Druery in the foyer of the Victorian Electoral Commission and let Druery complete his GVT, Shultz pulled out another GVT he had previously filled in and, at the last minute, lodged that instead. There was nothing Druery could do. However, Shultz had also misled other minor parties, some of which were previously sympathetic to the AJP.

So, what should be done to reform the voting system of Victoria’s upper house?

First of all,  a ‘citizens’ jury’ could investigate the issue, and take it out of the hands of politicians. This is because all the major parties will want to create a system that suits themselves and which would eliminate small parties.

It’s worth remembering that 30 per cent of Victorians voted for a small party at the last Victorian state election and probably more will have done so this time. A sizeable percentage of voters want smaller parties, but they definitely don’t want ‘one per cent’ micro-parties, who usually don’t even get out on the streets and campaign and who exist primarily for their manipulated preferences.

While Queensland, the ACT and the Northern Territory have one-house parliaments, each state upper house in Australia is different. Victorians have come to appreciate a Legislative Council based on eight different regions. For example, voters don’t want politicians who live in Melbourne to represent electors in Mildura. This is unlike NSW where voters elect upper house MPs state-wide.

A simple solution to Victoria’s current problems would be to disallow parties who get under two or three per cent of the vote from distributing their preferences. This would eradicate preference harvesting. To increase the membership of a registered party from 500 to 1,000 members would further limit micro-parties that have no real base and, in effect, are merely a name on a ballot. It could also be mandated that in Victoria a political party should have at least two hundred registered members in each of the regions, not just in one or two.