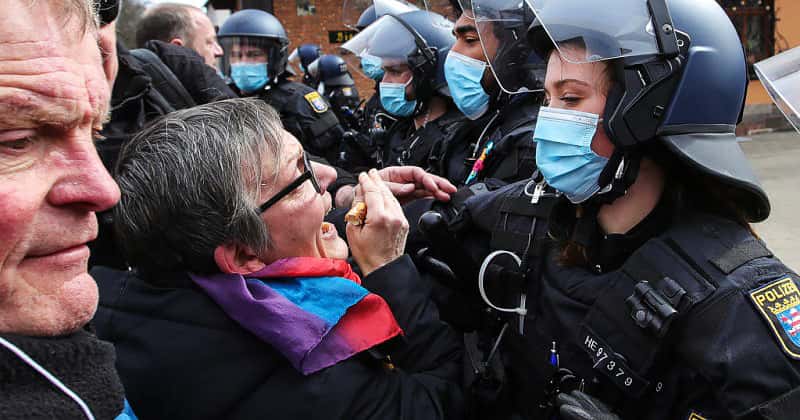 The head of the German Police Union has called for a total ban on all anti-lockdown protests because participants are not wearing masks or practicing social distancing.

After numerous hugely attended protests across Germany in recent months, Rainer Wendt has had enough and wants the government to criminalize them before they can begin.

“In these demonstrations, the violation of the law is preprogrammed and takes place permanently and thousands of times because the participants do not wear masks and do not keep the minimum distance,” Wendt told the Neue Osnabrücker Zeitung.

“You have to act much more rigorously against it,” he added.

According to Wendt, the intention of demonstrators to disobey lockdown rules (despite them literally being anti-lockdown protesters), should give authorities all the justification they need to ban the events in advance.

“It is completely incomprehensible why such demos are even still approved,” said Wendt.

Does Wendt really expect the thousands who attend the demonstrations to be concerned about masks and social distancing when a majority of them firmly believe that the government has massively overexaggerated the threat of the virus?

Many of the anti-lockdown protests in Germany have been organized by the Querdenker (lateral thinkers) movement, with authorities responding by characterizing the collective as a violent extremist group.

As we previously highlighted, Germany’s domestic BfV spy agency is monitoring anti-lockdown protesters, claiming they are potentially involved in a plot to subvert the country.

“Authorities fear that far-right extremists and conspiracy theorists who either deny the existence of Covid or downplay its threat to public health are exploiting lockdown frustrations to stir anger against politicians and state institutions five months before a general election,” reported Reuters.

Maybe members of the Querdenker movement all end up in detainment camps that have been set up to incarcerate persistent COVID-19 rulebreakers.

Because as anyone knows, German authorities putting dissidents in camps having treated them as second class citizens who don’t deserve basic rights always ends well.