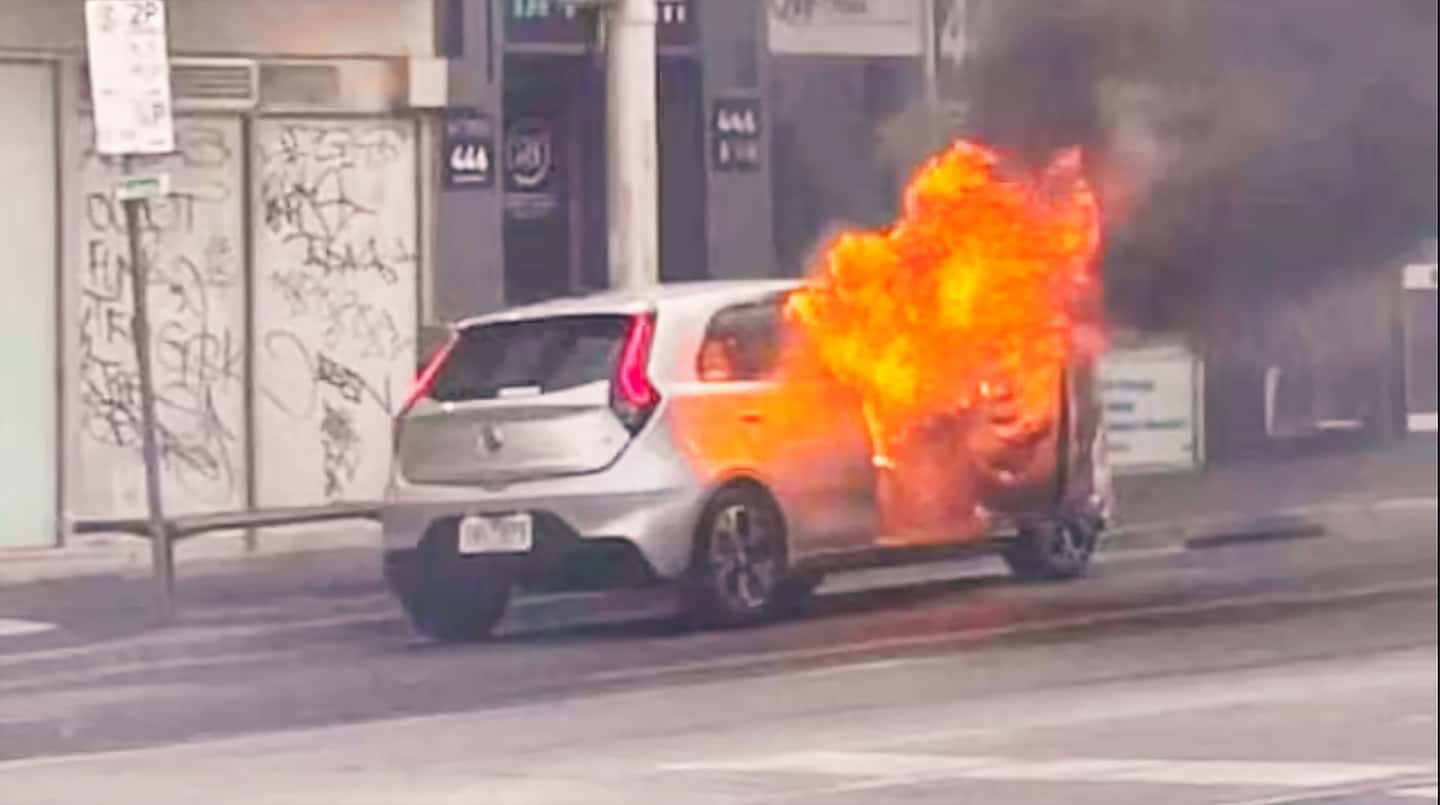 A man has set himself and his car on fire in front of horrified diners while screaming about Victoria's Covid-19 vaccine mandates.

The man emerged from a silver MG3 hatchback engulfed in flames near Church St in Richmond about 8pm on Saturday.

Police officers and firefighters doused the man with water to extinguish the blaze with the help of about five witnesses.

The bystanders helped restrain the man before police officers pinned him to the ground.

He was then taken into an ambulance and rushed to hospital.

One witness who helped restrain the man said his flesh was burning before the flames were put out with water.

'His skin was burning. He was on fire. His skin is stuck to [my] shirt,' she told The Herald Sun.

'He was off his face screaming about the mandates.'

Lydia O'Connor was having dinner at a nearby restaurant when she heard the man screaming.

'He poured gas on himself and on his car. It was on purpose,' Ms O'Connor told the publication.

Police cordoned off the area near the intersection of Church and Swan Street while customers at surrounding businesses were told to stay indoors.

Bystanders said they initially saw black smoke coming from the vehicle, which was left with a charred driver's side door.

Forensic police were then seen examining the area.

Victoria Police said it was called to the intersection after reports of a man self-harming. The man was taken to hospital with life-threatening injuries.

The incident caused disruptions to trams which run along Route 70 and Route 78 while the investigation continues.

Desperate citizens are now resorting to self-immolation to voice their frustrations with government’s oppressive COVID measures.

A Melbourne man immolated himself in front of horrified onlookers in protest of the nation’s draconian COVID vaccine passport system.

One of the bystanders captured footage of the heartbreaking incident over the weekend, explaining the man had been screaming about vaccine passports and a “digital ID.”

“He just f…..’ blew a car up,” the man recording said as flames billowed out of a car down the road.

“Dan Andrews, this is on your f…… hands, you dog,” he added, referring to the Labor Victorian Premier.

Victoria police officers and firefighters reportedly managed to douse the man with water as he emerged on fire from his burning car and rush him to the hospital.

One of the bystanders who helped restrain the man until he was fully put out told The Herald Sun that “he was on fire.”

“His skin was burning,” she said. “He was off his face screaming about mandates. His skin is stuck to my shirt.”

One witness Lydia O’Connor said she was at a nearby cafe when she heard the man’s screaming about COVID mandates.

“He poured gas on himself and on his car. It was on purpose,” O’Connor said. “He was screaming about mandates.”

“He was screaming, ‘no vax ID’ and throwing books,” she added.

Another witness confirmed he was screaming about Victoria’s vaccine mandates.

“I will never erase his wailing pain from his burns from my ears,” Barryman said.

And despite the emergence of the mild Omicron variant, Australia has seized it as an opportunity to roll out even more COVID restrictions, such as renewed mask mandates, mandatory testing for interstate travel, and steeper fines for COVID rule violators.

In fact, Australia’s chief pharmacist Trent Twomey, a Cairns chemist, said citizens must “accept” endless booster shots because COVID is “going to be with us for many years.”

Cairnsnews has some news for the closely-tied Liberal Party member Mr Twomey, that pharmacies will disappear just as quickly as those killed by mRNA vaxx deaths. Many reputable doctors and researchers world-wide have warned of the deaths of tens of thousands in 12 months to three years time. In the US it has already started.