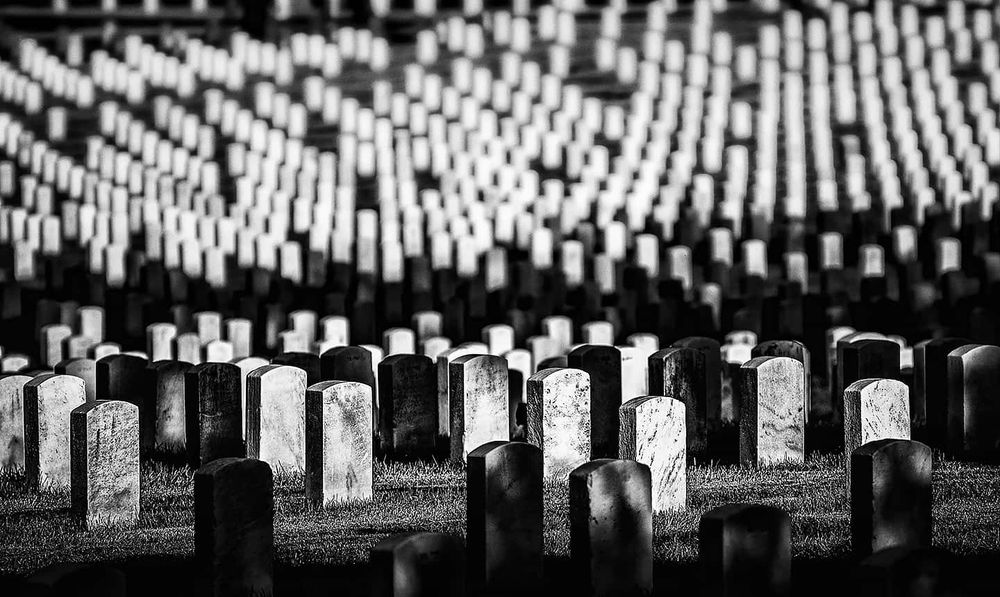 Insurance companies are reporting a jump in death payouts due to a dramatic rise in the number of deaths. The rise in the death rate is being corroborated by death certificate data from the Centers for Disease Control and Prevention (CDC).

The death rate is up by 40 percent from pre-pandemic levels according to Scott Davison, chief executive of OneAmerica, a major insurance company based in Indianapolis. During an online news conference on Dec. 30, 2021, Davison said the change was unprecedented.

“We are seeing, right now, the highest death rates we have seen in the history of this business,” he said.

OneAmerica sells life insurance to employers nationwide, and similar figures are found throughout the industry.

“The data is consistent across every player in that business,” Davison said. “And what we saw just in the third quarter—we’re seeing it continue into the fourth quarter—is that death rates are up 40 percent over what they were pre-pandemic. Just to give you an idea of how bad that is, a three-sigma or a one-in-200-year catastrophe would be a 10 percent increase over pre-pandemic. So 40 percent is just unheard of.”

This 40 percent figure doesn’t represent folks dying of old age, but is instead a reflection of deaths in working-age adults, aged 18 to 65. However, what’s responsible for the alarming spike in fatalities in this age group isn’t clear.

With all of the concern about COVID-19 lately, the contagion seems a likely choice. But according to Davison, something else is at play. He said the data coming from insurance companies—entities in the business of paying out when people die—show that the deaths being reported as COVID-19 fatalities “greatly understate” the actual deaths from working age people hit by the pandemic, as most of the claims being filed aren’t being classified as COVID-19 deaths.

“It may not all be COVID on their death certificate, but deaths are up just huge, huge numbers,” he said.

Also taking part in the news conference was Brian Tabor, president of the Indiana Hospital Association. He also noted a dramatic rise in illness from a different perspective. Tabor said hospitals across Indiana were being flooded with patients “with many different conditions.”

In October 2021, The Times of India reported that health insurers saw a “huge surge in non-COVID claims,” with the head of interventional cardiology at a Mumbai, India, hospital noting a 40 percent increase in heart problems compared to the previous six to eight months.

Ever since COVID-19 hit, the world has been bracing itself for huge numbers. Most recently in a White House press briefing on Dec. 17, 2021, President Joe Biden warned that unvaccinated Americans can look forward to a “winter of severe illness and death for yourselves, your families, and the hospitals you may soon overwhelm.”

Still, such astronomical figures emerging all of a sudden are hard to fathom. The pandemic has worn on for nearly two years, and health officials have been keeping a close eye on the death count. What could account for such a dramatic jump at the end of 2021?

[ZH: Answering this question is Epoch's Petr Svab with an in-depth analysis - buckle up]

Americans have been dying at a significantly higher rate over the past two years or so, but the COVID-19 disease tells only part of the story. Among seniors, the pandemic could explain the increase in mortality more easily than among younger people, where there’s a gap requiring further explanation.

Overall, there appear to be three distinct patterns in the data based on age:

Among those of age 0 to 17, mortality remained virtually unchanged since 2019.

Among those aged 18 to 49, mortality rose dramatically in the first half of 2020, then somewhat plateaued before increasing again in the third quarter of 2021.

The 50 to 64 age group appears to be a mix of the latter two patterns.

Under the age of 18, COVID-related deaths barely register when visualized.

For those aged 75 and older, the novel disease more than explains any increases in mortality. For those aged 65 to 74, deaths were on the rise long before the pandemic. Excluding the COVID deaths leaves increases slightly above the previous trend.

Among those aged 18 to 65, however, there emerges the opposite phenomenon—after exclusion of COVID deaths, a significant hike in mortality remains. The non-COVID increase appears more pronounced in the younger age groups and less in the older ones.

There are several factors that would explain at least part of the excess deaths.

Drug overdoses skyrocketed in 2020 with more than 20,000 more dying in the 18–64 age group than the year before. The Centers for Disease Control’s (CDC) preliminary data for the first half of 2021 indicates the trend even somewhat intensified.

There are several factors that would explain at least part of the excess deaths. Drugs, Alcohol, Murder Drug overdoses skyrocketed in 2020 with more than 20,000 more dying in the 18–64 age group than the year before. The Centers for Disease Control’s (CDC) preliminary data for the first half of 2021 indicates the trend even somewhat intensified.

Deaths involving alcohol—not just alcohol poisoning, but also those due to alcoholic cirrhosis of the liver and other alcohol-induced causes—have been on the rise in recent years, but the 2020 increase was particularly significant. Nearly 8,000 more died in 2020 than the year before in the 18–64 age group. The 2021 data is not yet available.

Homicide deaths increased nearly 30 percent from 2019 to 2020 in the 18–64 age group, accounting for nearly 4,000 excess deaths. Last year is shaping up to be similarly homicidal, based on CDC’s preliminary data for the first half of 2021.

With COVID-19 deaths excluded and assuming drug overdoses, alcohol, and homicide deaths continued in 2021 at a similar intensity as the year before, there was still about 50,000 excess deaths last year in the 18-64 age group.

The CDC and some experts argue that the excess deaths could be misclassified COVID-19 deaths as well as deaths due to lack of care because of hospitals overwhelmed with COVID patients. They point to the fact that about third of Americans die at home. Their death certificates would be probably written by attending physicians who may not test the patient for COVID-19.

The CDC issued guidance on June 15, 2020, that all people suspected of dying of COVID-19 should be tested post mortem, but it’s not clear to what degree medical practitioners are following through on it.

This explanation may be limited for several reasons.

Deaths at home indeed increased with the onset of the pandemic, from less than 32 percent in 2019 to more than 36 percent in June 2020. But then the rate dropped again, to less than 31 percent in December 2020. If people were forced to die at home because medical care wasn’t available to them, it doesn’t appear to have been widespread enough to explain the excess mortality gap.

The argument for misclassified COVID deaths usually assumes that the dying person was suffering from multiple ailments and the attending physician failed to note COVID-19 as at least a contributing factor. It’s not clear how often that applies to younger people who are generally healthier and among whom COVID-19 deaths are rarer and may stand out more.

Finally, the argument appears to use backward reasoning—assuming the excess deaths are caused by COVID-19 and then seeking supporting logic on how that could be.

There’s a growing group of doctors and researchers who point to the COVID-19 vaccines as a possible culprit in at least a part of the excess deaths last year. They usually point to several physiological mechanisms through which the vaccines could cause harm combined with known side effects as well as data from the Vaccine Adverse Event Reporting System (VAERS), a database of reports of health problems that have occurred after a vaccination and may or may not have been caused by it.

VAERS reports exploded with the introduction of the COVID-19 vaccines. By Jan. 7, there were over a million reports, including more than 21,000 deaths. Previously, there would be about 40,000 reports and a few hundred deaths a year. They are largely filed by health care personnel, based on previous research.

The usual arguments against the VAERS data have been that it’s unverified and unreliable. Some researchers have pointed out, however, that the system isn’t meant to provide definitive answers, but rather early warnings. In their view, the reports have raised numerous red flags that haven’t been sufficiently investigated.

The latest detailed cause-of-death data available on the CDC website is for the year 2020. For 2021, CDC has been releasing some preliminary data bi-weekly, but cautions that it has a lag of 8 weeks or more as the death certificate data streams in from around the country. For this analysis, only data up until October has been used. For specific causes of death beyond COVID-19, pneumonia, and influenza, the CDC doesn’t break down the available 2021 data by age, limiting its usefulness for this analysis.

In addition, CDC’s COVID-19 mortality data that covers 2021 attributes to the virus all deaths where COVID-19 was marked on the death certificate, regardless whether it was listed as the underlying cause or as a contributing factor. Early in the pandemic, the CDC instructed medical practitioners to mark all deceased who had tested positive, and even those with COVID-like symptoms but who had not been tested, as deaths caused by COVID-19. Later in 2020, the guidance gradually changed. Untested cases were to be separated and COVID-19 was required to be at least a contributing factor to be listed on the death certificate.

In the second half of 2020, the last period with available death certificate data on this point, nearly 90 percent of deaths involving COVID-19 had the disease listed as the underlying cause of death rather than a contributing factor.

Some experts have also pointed to government policies as a possible culprit in some excess deaths. School closures and business lockdowns have led to both financial and psychological depression, some research and anecdotal reports indicate, which may have led to death in some cases. Suicide deaths, though, have been relatively stable between 2019 and June 2021, based on available data.

There may be a more hidden health impact of COVID-19. A study published in December found that people hospitalized for COVID-19 had somewhere between two and three times the risk of dying in the following 12 months of something other than COVID-19 than those going to a doctor, but testing negative.

“This huge explosion of inflammation during a severe episode of COVID seems to be causing a lot of other problems,” said Arch Mainous, the lead author of the study and a vice chair for research in the Department of Community Health and Family Medicine at the University of Florida.

“It looks like there is an overall impact on your body from this biological insult,” he told The Epoch Times.

The study has several limitations. It included people only from one hospital system in Florida and as such may not fully apply to the entire U.S. population. Also, it controlled for comorbidities, but used the Charlson Comorbidity Index (CCI), which only includes 17 general factors that aren’t specific to COVID-19. It includes age as well as issues such as history of heart attack, stroke, cancer, AIDS, cirrhosis, kidney disease, and diabetes. Mainous acknowledged that the index may be less predictive in younger patients.

Finally, the studied population as a whole had on average a particularly high risk of dying. Of the more than 13,600 people included, over 2,600 died within a year—nearly 20 percent. For comparison, Americans of age 85 or higher have about 10 percent annual mortality.