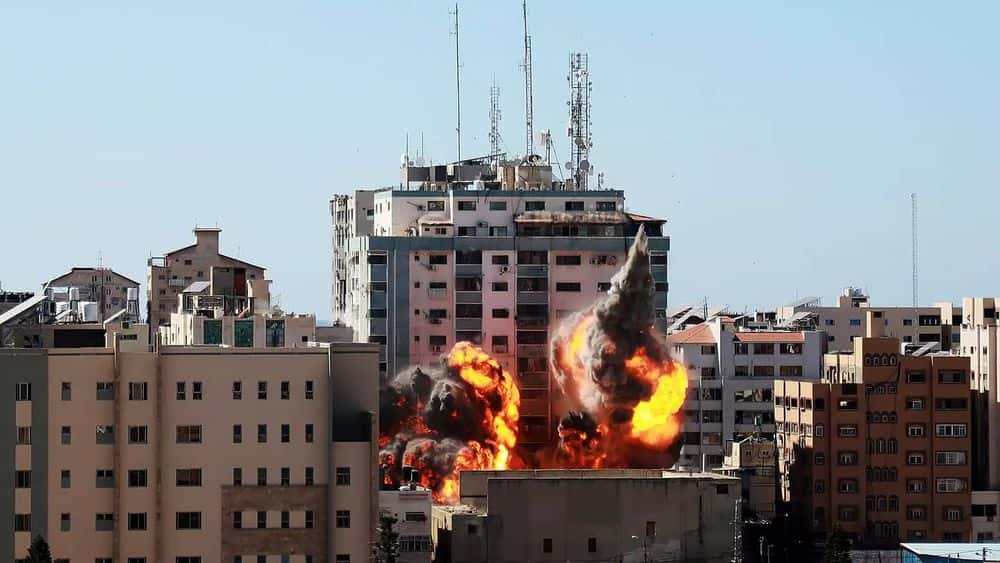 The destruction of two important Gaza buildings housing 20 media outlets was both shocking and predictable. History shows that if the media aren’t around to document Israel’s war crimes, it’s a lot easier for it to commit them.

On Tuesday, Israel bombed the 10-storey Al-Jawhara Tower, causing it to collapse. Before doing so, it had ‘benevolently’ warned that the airstrikes were coming. The following day, it bombed the 14-storey Al-Shorouk Tower, also giving warning it was going to do so.

Most reports have the buildings as evacuated before being levelled. But without these media offices, reporting on Israel’s other war crimes will be left largely to what little media remain and citizen journalists.

The buildings were significant. A statement by the International Federation of Journalists (IFJ) noted the Al-Jawhara building housed the offices of 13 media institutions and NGOs. And an advisory by the Committee to Protect Journalists noted that the Al-Shorouk building housed at least seven media outlets.

A further statement by the same committee said that the Israeli military had defended its bombing of the building via email, bizarrely claiming it had “acted within international law,” alleging the Al-Jawhara building housed Hamas’ intelligence and military offices, and saying the Al-Shorouk building was a base for Hamas’ military intelligence offices and “infrastructure to communicate tactical-military information.”

Just minutes after the Al-Shorouk building was destroyed, I spoke by phone with Shadi Ali, a producer who had worked there for ten years and was understandably devastated at what had happened. He told me of previous occasions when Israel had bombed the building, in 2009, 2012, and 2014.

“I was there in 2012. My office was on the 14th floor when it was hit at 6am. I was sleeping; I had only slept for one-and-a-half hours when it was hit by two missiles on the top floor,” he told me. “When it was bombed in 2014, we had taken precautions and left it already. They struck the 15th floor, destroying it completely. Our floor became the top floor after that.”

The building was on a main Gaza street, Omar Mukhtar, surrounded by residential apartment buildings. I asked whether he knew if there had been casualties this time. He replied, “We’re waiting, because often they’ll strike again soon after, knowing that people have come to search for casualties.”

I’ve witnessed this tactic with my own eyes. In January 2009, while I was accompanying Palestinian Red Crescent medics, one of the bodies the medics retrieved was that of a Kiffah Lum Towwak, 35, killed by an Israeli missile strike on her backyard in Jabaliya, just minutes after a strike which killed a family member living in the same house.

The same month, I was inside the now-destroyed Al-Shorouk building, having just finished an interview with RT about what I’d seen while riding in ambulances in the extremely dangerous areas of Gaza’s north. Shortly after concluding the interview, Israel shelled the building at least seven times. Thankfully, the tank shelling didn’t destroy the building, and we were able to run down the stairs to “safety” (although in reality nowhere was safe).

The Al-Shorouk building was again bombed a week after this. Reporters Without Borders and the Committee to Protect Journalists condemned the bombing and noted that the Israeli military had contacted Reuters (which had an office inside) “minutes before the attack to confirm the location of its Gaza office,” and had explained it would not be targeted.

In November 2012, I reported from a hospital in Deir al-Balah, central Gaza, after Israeli attacks, and documented the destruction of bridges and other infrastructure as well as visiting the media buildings which had been targeted. I wrote at the time, “At least three Palestinian journalists were killed in the November 2012 Israeli attacks on Gaza, and at least 12 reported injured. The Sharook building suffered damage on its upper floors from a number of bombings including drone and possibly Apache helicopter missiles. The building housing Aqsa TV and various other media offices likewise suffered major damage on its upper floors.”

Having journalists on the ground in a place like this is critical. In previous wars on Gaza, Israel has committed a litany of war crimes, including in 2009 targeting with a flechette bomb and killing a uniformed Palestinian medic as he worked to save injured civilians; firing more dart bombs on mourners the following day, killing six, including a pregnant woman; targeting with sniper fire two medics I was with, during ceasefire hours; assassinating children and infants; drone-striking a 14-year-old during ceasefire hours; raining white phosphorous down heavily on civilian areas throughout Gaza; bombing a school sheltering the displaced; bombing hospitals and repeatedly shelling a home Israeli soldiers had forced 60 members of an extended family into, killing 26, including 10 children and seven women.

And that was only in 2009. In 2012 and 2014, Israel again committed more unspeakable crimes of war, destroying entire neighbourhoods and massacring the residents, shelling children on a beach, and drone-striking a teen hours before ceasefire, among many others.

And now, after a few days of Israeli bombardment, horrific reports are emanating from Gaza, including accounts of Palestinians killed by what is believed to be toxic gas, and Israeli precision bombings killing entire families. As of May 14, Gaza’s health ministry reports at least 119 killed, including 31 children.

Meanwhile, across occupied Palestine, Israelis are calling for Palestinians’ deaths, with a rabbi allegedly saying, “I call on you to kill all Arabs!” and others using Facebook and Telegram to organize attack mobs. And it was recently reported, “Israel’s defense minister Benny Gantz threatened more destruction than he ordered in Gaza in 2014. At that time, he was Israel’s chief of staff commanding the 51-day assault that killed more than 2,200 Palestinians, including 551 children.”

Also reported is an Israeli MP’s call for the Israeli army to “flatten the Strip.” That is nothing new. As I wrote in 2014, “During the eight days of slaughter, Israeli figures called to ‘blow Gaza back to the Middle Ages, destroying all the infrastructure including roads and water,’ and to ‘Flatten all of Gaza. There should be no electricity in Gaza, no gasoline or moving vehicles, nothing,’ said the deputy Israeli Prime Minister Eli Yishai and Gilad Sharon respectively.”

Israel’s bombing spree of media targets has been rightly condemned. The Palestinian Journalists Syndicate stated that, “the targeting of media headquarters in the brutal bombardment of Gaza is part of the full-fledged war crimes committed by the Israeli occupation authorities against the Palestinian people,” and called for the United Nations and the Red Cross “to provide urgent protection to journalists and the media, and to activate Security Council resolution 2222 (which includes the protection of journalists) and oblige the occupation to fulfil [sic] this.”

The CPJ stated, “It is utterly unacceptable for Israel to bomb and destroy the offices of media outlets and endanger the lives of journalists, especially since Israeli authorities know where those media outlets are housed.” And the International Federation of Journalists said, “The international community cannot turn a blind eye to the systematic violations of human rights and the deliberate targeting of media and journalists. Urgent actions must be taken to hold those responsible for these crimes internationally accountable”.

However, while journalist protection committees have condemned the recent Israeli bombings of media buildings in Gaza, Western corporate media generally haven’t. Imagine, though, if this was taking place in Syria: if Syrian or Russian planes premeditatedlybombed and levelled media buildings there. That would be front page news for days, if not weeks.

I would go back to Gaza to report on this horror if I could enter, but that’s impossible: Israel would not let me in, and is not allowing journalists in in general.ALSO ON RT.COMIDF announces Israeli GROUND TROOPS now ‘attacking’ Gaza Strip amid fears of imminent invasion

In December 2008, RWB reported, Israel declared the Gaza Strip a “closed military zone” and denied access to journalists working for international media. And now, as Shadi Ali told me the other day, Israel knows there are not many foreigners in Gaza to report what is going on. There is a media blockade, on top of the brutal siege of Gaza and Israel’s bombardment.

“Israel will commit so many crimes in Gaza, while foreign media are not present,” Ali predicted. And he’s right. As Israel threatens to invade by land, the protection of media buildings and journalists becomes all the more important, because Israel will commit more war crimes. They’ve already pledged to make Gaza burn.