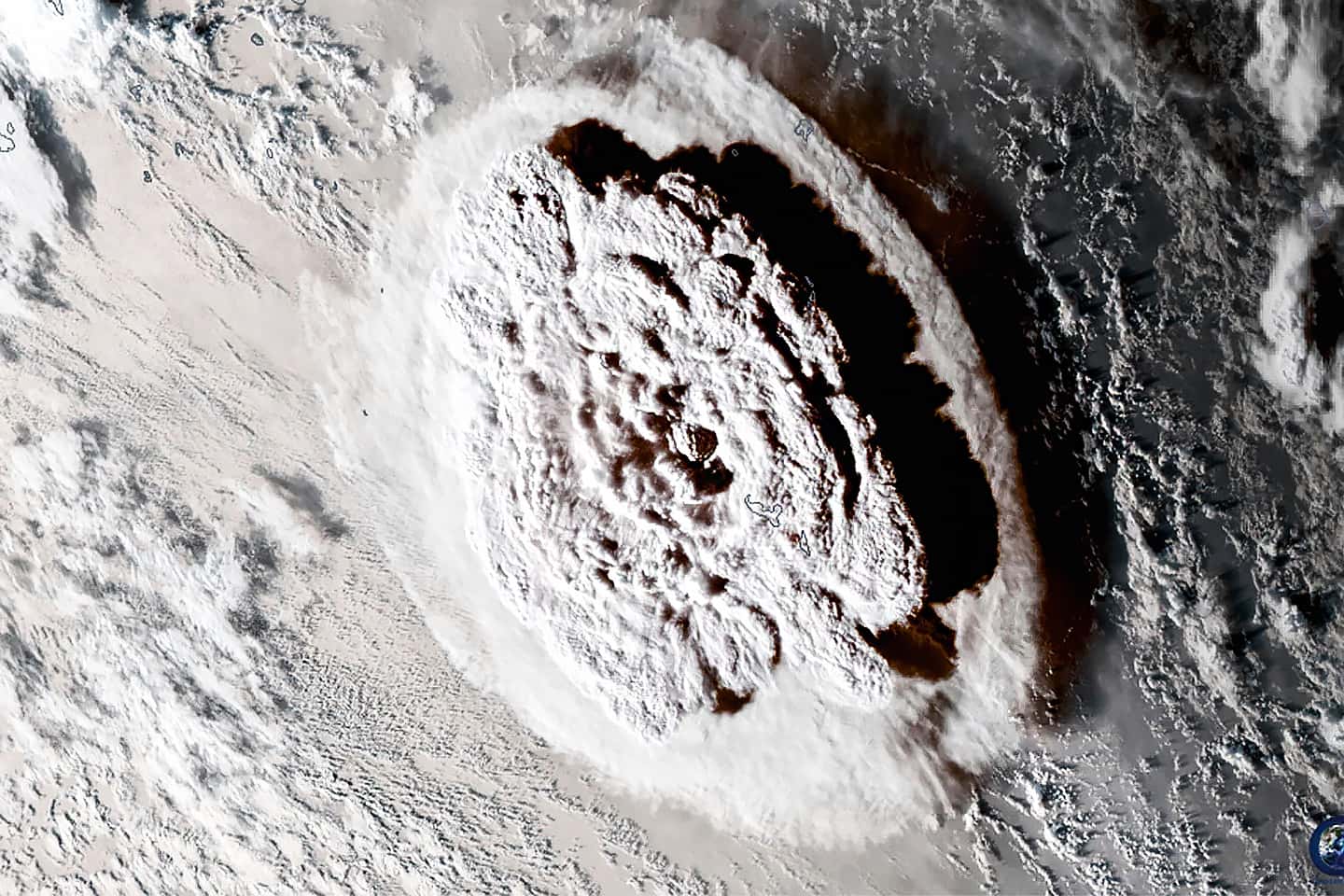 A marine tsunami warning has been issued for parts of the east coast of Australia, including the Gold Coast, after a giant underwater volcano erupted near the Tonga Islands.

The Hunga-Tonga-Hunga-Ha’apai volcano flared up on Saturday evening (local time), sending large waves crashing into the Pacific country of Tonga.

As a result, Australia’s Bureau of Meteorology has warned there is now a tsunami threat to Queensland’s marine environment.

The tsunami threat is predicted to hit Surfers Paradise anytime after 8.00pm and will “persist for several hours”, according to the weather bureau.

“People are strongly advised to get out of the water and move away from the immediate water’s edge of beaches, marinas, harbours, coastal estuaries and rock platforms,” BOM said.

“Boats in harbours, estuaries or shallow coastal water should return to shore.

“Vessels already at sea should stay offshore in water at least 25 metres deep until further advised.”

People are being urged not to go to the coast to watch the tsunami as there is the possibility of “dangerous, localised flooding of the immediate foreshore”.

“Tsunami waves are more powerful than the same size beach waves,” the Bureau of Meteorology said.

“There will be many waves and the first wave may not be the largest. Take care in other coastal areas where low-level effects may be observed.”

It’s not yet known if any Australians in Tonga have been injured, however the Federal Government has confirmed they are liaising with their counterparts.

“Tonga is part of our Pacific family and our thoughts are with the entire community dealing with the impact of the volcanic eruption and tsunami,” a spokesperson for the Australian Government said.

“The Prime Minister and Minister for Foreign Affairs are monitoring the situation and Australia stands ready to provide support to Tonga if requested.

“Initial assessments are still underway and DFAT is working to ensure Australians in Tonga are safe and accounted for.”

Ongoing information and details can be found here.

Tsunami waves caused by a giant underwater volcanic eruption have hit the Pacific country of Tonga.

Social media footage showed water washing through a church and several homes, and witnesses said ash was falling over the capital, Nuku'alofa.

The eruption of the Hunga Tonga-Hunga Haʻapai volcano sent shockwaves across the South Pacific.

One Tongan resident, Mere Taufa, said the eruption hit as her family was preparing for dinner, and her younger brother thought bombs were exploding nearby.

"My first instinct was to take cover under the table, I grabbed my little sister, and screamed at my parents and others in the house to do the same," New Zealand news site Stuff.co.nz quoted her as saying.

Ms Taufa said the next thing she knew, water was rushing into their home.

"You could just hear screams everywhere, people screaming for safety, for everyone to get to higher ground," she added.

The plumes of gas, smoke and ash pouring from the volcano reached 20km into the sky, Tonga Geological Services said.

The eight-minute eruption was so violent it could be heard as "loud thunder sounds" in Fiji, more than 800km (500 miles) away, according to officials in the capital Suva. The Fijian Government has issued a tsunami advisory and opened evacuation centres for people in low-lying coastal areas.

In New Zealand, which is more than 2,300km away, officials have warned of storm surges.

The National Emergency Management Agency said coastal areas on the north and east coast of the North Island could see "strong and unusual currents and unpredictable surges at the shore".

The Bureau of Meteorology said the Hunga Tonga-Hung Ha’apai volcano erupted at 3.10pm AEDT on Saturday

A tsunami generated by an undersea volcano erupting near Tonga has triggered marine warnings for Australia’s east coast and land warnings for Norfolk Island and Lord Howe Island.

A tsunami generated by an undersea volcano erupting near Tonga has triggered marine warnings for Australia’s east coast and land warnings for Norfolk Island and Lord Howe Island.

The Bureau of Meteorology said the Hunga Tonga-Hung Ha’apai volcano erupted at 3.10pm AEDT on Saturday and sea level observations confirmed a tsunami had been generated.

Land warnings for Norfolk Island and Lord Howe Island were issued, while marine warnings were current for all coastal areas of NSW and large parts of the Queensland, Victorian and Tasmanian coasts, according to a BOM statement on Saturday evening.

In Victoria a marine warning was in place from 9.30pm AEDT from Lakes Entrance to 60 nautical miles east of Gabo Island including the East Gippsland coast.

“People in areas with threat of land inundation and flooding are strongly advised by emergency authorities to go to higher ground or at least one kilometre inland,” the statement said.

“In areas with a threat to the marine environment only, emergency authorities advise people to get out of the water and move away from the immediate water’s edge of harbours, coastal estuaries, rock platforms and beaches.”