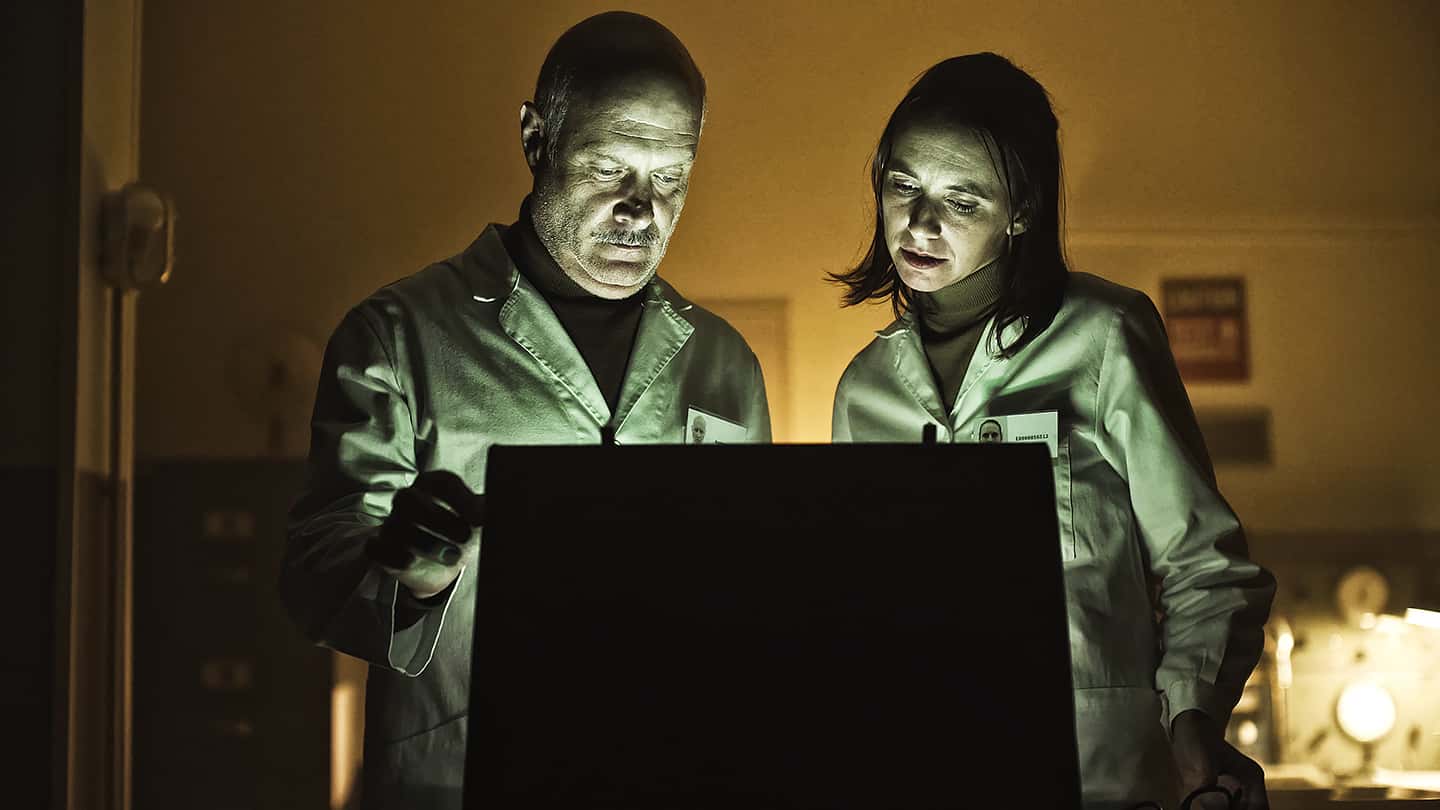 Moderna filed a patent application in February 2016. The researchers say the discovery cannot be a coincidence - the chance that it arose this way through natural evolution is one in three trillion.

RIO DE JANEIRO, BRAZIL – Scientists have discovered genetic material in the spike protein of SARS-CoV-2, which was patented by vaccine manufacturer Moderna in 2016. The researchers’ discovery again supports the hypothesis that the Coronavirus originated in the laboratory.

The identified genetic code snippet was found at the furin cleavage site of the virus: The part of SARS-CoV-2 in which it differs significantly from other coronaviruses and thanks to which the virus can so successfully infect humans.

Even before that, because of this structure, it had been repeatedly argued that the virus must have originated in the laboratory: Some scientists doubted that it could have evolved naturally in this way.

The critical physicist Roland Wiesendanger also sees the unique furin cleavage site of SARS-CoV-2 as an important indication that the virus was produced artificially.

Moderna filed a patent application in February 2016. Researchers say the discovery cannot be a coincidence – the chance that it arose this way through natural evolution is one in three trillion.

Moderna filed the patent as part of its cancer research. According to the researchers’ analysis, the virus shares a sequence of 19 nucleotides in total with the said Moderna genome, twelve of which form the structure of the furin cleavage site. The sequence is part of a gene called MSH3, which affects how damaged cells in the body repair themselves.

The study’s authors write that the genetic code may have entered the SARS-CoV-2 genome via infected human cells expressing the MSH3 gene.

University of Warwick virologist Professor Lawrence Young told the Daily Mail that the finding was not significant enough to indicate tampering with the virus in the lab – as “bizarre” as the finding is.

Nevertheless, he described the results as pure coincidence, which contradicts the researchers’ calculations. A corresponding letter in “the Lancet” provided early evidence that research into a possible laboratory origin of the Coronavirus was to be deliberately prevented.

With all the evidence of cover-ups by Anthony Fauci and other proponents of gain-of-function research, such cries of “it cannot be what must not be” have a bland aftertaste.

By The Rio Times

More evidence Covid was tinkered with in a lab

Fresh suspicion that Covid may have been tinkered with in a lab emerged today after scientists found genetic material owned by Moderna in the virus's spike protein.

They identified a tiny snippet of code that is identical to part of a gene patented by the vaccine maker three years before the pandemic.

It was discovered in SARS-CoV-2's unique furin cleavage site, the part that makes it so good at infecting people and separates it from other coronaviruses.

The structure has been one of the focal points of debate about the virus's origin, with some scientists claiming it could not have been acquired naturally.

The international team of researchers suggest the virus may have mutated to have a furin cleavage site during experiments on human cells in a lab.

They claim there is a one-in-three-trillion chance Moderna's sequence randomly appeared through natural evolution.

But there is some debate about whether the match is as rare as the study claims, with other experts describing it as a 'quirky' coincidence rather than a 'smoking gun'.

In the latest study, published in Frontiers in Virology, researchers compared Covid's makeup to millions of sequenced proteins on an online database.

The virus is made up of 30,000 letters of genetic code that carry the information it needs to spread, known as nucleotides.

It is the only coronavirus of its type to carry 12 unique letters that allow its spike protein to be activated by a common enzyme called furin, allowing it to spread between human cells with ease.

Analysis of the original Covid genome found the virus shares a sequence of 19 specific letters with a genetic section owned by Moderna, which has a total of 3,300 nucleotides.

WHAT IS THE FURIN CLEAVAGE SITE?

SARS-CoV-2, which causes Covid, carries all the information needed for it to spread in around 30,000 letters of genetic code, known as RNA.

But it is the only coronavirus of its type to carry 12 unique letters that allow it to be activated by a common enzyme called furin.

This in turn makes the virus better at invading neighbouring cells.

The so-called furin cleavage site is located on the virus' spike protein, the structure that binds to human cells in the first place.

Scientists sometimes add this element to lab viruses to make them more infectious, but in nature, pathogens can acquire it by swapping genetic code with other members of their family.

The furin has been the focal point of intrigue for many scientists studying the origins of the virus because no other known member of Covid's family  - a group called Sarbecoviruses - have the site.

The US-based pharmaceutical firm filed the patent in February 2016 as part of its cancer research division, records show.

The patented sequence is part of a gene called MSH3 that is known to affect how damaged cells repair themselves in the body.

Scientists have highlighted this pathway as a potential target for new cancer treatments.

Twelve of the shared letters make up the structure of Covid's furin cleavage site, with the rest being a match with nucleotides on a nearby part of the genome.

Writing in the paper, led by Dr Balamurali Ambati, from the University of Oregon, the researchers said the matching code may have originally been introduced to the Covid genome through infected human cells expressing the MSH3 gene.

Professor Lawrence Young, a virologist at Warwick University, admitted the latest finding was interesting but claimed it was not significant enough to suggest lab manipulation.

He told MailOnline: 'We're talking about a very, very, very small piece made up of 19 nucleotides.

'So it doesn't mean very much to be frank, if you do these types of searches you can always find matches.

'Sometimes these things happen fortuitously, sometimes it's the result of convergent evolution (when organisms evolve independently to have similar traits to adapt to their environment).

'It's a quirky observation but I wouldn't call it a smoking gun because it's too small.

He added: 'It doesn't get us any further with the debate about whether Covid was engineered.'

Dr Simon Clarke, a microbiologist at Reading University, questioned whether the find was as rare as the study claims.

He told MailOnline: 'There can only be a certain number of [genetic combinations within] furin cleavage sites.

'They function like a lock and key in the cell, and the two only fit together in a limited number of combinations.

'So it's an interesting coincidence but this is surely entirely coincidental.'

Circumstantial evidence has long raised questions about the origin of Covid and its link to the Wuhan Institute of Virology.

The facility was known to be conducting experiments on bat coronavirus strains similar to the one responsible for the pandemic.

China insisted early and often that the virus did not leak from the lab, claiming that crossover to humans must have occurred at a 'wet market' in Wuhan that sold live animals.

Perhaps driven by animosity for then-US President Donald Trump, who embraced the lab leak theory early on, mainstream media and academics in the West heaped scorn on the possibility, calling it an unhinged conspiracy theory.

But leaked emails showed that top scientists advising the UK and US Governments expressed concerns about the official narrative privately.

Sir Jeremy Farrar, an eminent British expert who publicly denounced the theory as a 'conspiracy', admitted in a private email in February 2020 that a 'likely explanation' was that the virus was man-made.

The then-UK Government adviser said at the time he was '70:30 or 60:40' in favour of an accidental release versus natural origin.

In the email, sent to American health chiefs Dr Anthony Fauci and Dr Francis Collins, Sir Jeremy said it was possible Covid had been evolved from a Sars-like virus in the lab.

He went on that this seemingly benign process may have 'accidentally created a virus primed for rapid transmission between humans'.

But the British scientist was shut down by his counterparts in the US who warned further debate about the origins of the virus could damage 'international harmony'.

In the latest twist, a study earlier this month found traces of Covid samples that contained genetical material from humans, hamsters and monkeys and may have predated the official pandemic timeline.

Dec 8, 2019 - Earliest date that China has acknowledged an infection

Jan 9 - China makes public the genome of the coronavirus

2012: Six miners struck down with  with a mysterious flu-like illness in Mojiang cave in Yunnan.

They were found to have been infected with the closest known relative to Covid, sharing 97% of its genes.

Samples RATG13 are sent to the Wuhan Institute of Virology to be studied.

Oct - Whistleblower Wei Jingsheng claims China deliberately spread Covid at The World Military Games in Wuhan in October, two months before the rest of the world knew about the virus

Oct - Xi Jinping's authoritarian regime tried desperately to shut down whistle-blowers like Mr Jingsheng. Any references made in social media about a new SARS virus or 'outbreak' were censored

Nov 10 - Milanese woman has a skin biopsy, producing a sample which later shows signs of the virus

Dec - Doctors in China, including Li Wenliang, report existance of new type of respiratory infection. But Chinese police arrested him and eight of his colleagues for questioning - instead of publicising reports and warning public

Dec 1 - Chinese researchers report an infection on this date in a peer-reviewed study, but it has not been acknowledged by Beijing

Dec 26 - Samples analysed suggested a new type of SARS was circulating as early as December 26, but Wuhan was not locked down until January 22

Jan 3 - Covid-19 infections begin sweeping across other nations including the U.S. as the WHO labelled the outbreak a Public Health Emergency of International Concern

June 2021: Leading US virus expert Dr Anthony Fauci was warned Covid may have been engineered in a lab, emails publicly released reveal.

August: The world's first Covid-19 patient may have been infected by a bat while working for a Wuhan lab in China, WHO chief Dr Peter Embarek said

August: A damning report by Republicans in the US claims coronavirus leaked from the Wuhan Institute of Virology, shortly after the facility tried to improve air safety and waste treatment systems

The report also cited 'ample evidence' that lab scientists were working to modify coronaviruses to infect humans and such manipulation could be hidden.

October: US intelligence review into origins of pandemic does not reach a judgement on whether the virus emerged via animal-to-human transmission or a lab leak.

January 2022: Leaked emails from top UK scientist Sir Jeremy Farrar showed he admitted in February 2020 that it was a 'likely explanation' that the virus could be man-made. But he went on to brand the theory a 'conspiracy'.

February: Sir Farrar is called to be interviewed under oath at the US Congress. Officials want him to explain why he shifted away from the lab leak theory.