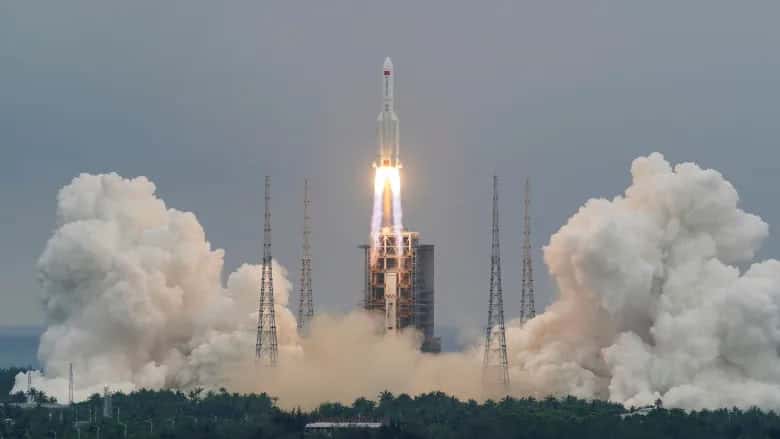 'It's just considered bad practice to throw large pieces of metal from the sky,' an astrophysicist said

The Long March-5B Y2 rocket, carrying the core module of China's space station Tianhe, takes off from Wenchang Space Launch Center in China's Hainan province on April 29. A module that launched with the rocket, Tianhe, is expected to re-enter Earth's orbit on May 9.

On April 29, China successfully launched a crew module for a space station that it says will be completed by the end of 2022. But the first stage of the rocket that sent that module into orbit is falling to Earth uncontrollably.

The module, Tianhe, which means "Harmony of the Heavens," launched on a Long March 5B Y2, China's largest rocket, on April 29. While most rockets launch in two stages, the first stage usually re-enters in a known location, or some remain in orbit eventually burning up upon re-entry (only the SpaceX Falcon first stage rockets return to Earth in a controlled landing).

However, because the Long March 5B is so large, some space experts predict some of its components may reach Earth.

"The odds are this thing will break up over the ocean," said Jonathan McDowell, an astronomer at Harvard University's Astrophysics Center. "But there's a chance that it will hit a populated area. And then we could be looking at some property damage, hopefully no casualties."

This is not exactly unprecedented for China.

"This is the second launch of this type of rocket, the Long March 5B," McDowell said. "The first one was a year ago, and it re-entered as well and caused some damage to villages in the Ivory Coast. It strew pieces of metal over about 100 miles worth of land."

Though not unprecedented, it is considered bad practice for countries and commercial enterprises to allow things to fall into Earth orbit uncontrollably.

"It's just considered bad practice to throw large pieces of metal from the sky," said McDowell.

Early on in the space age, in the 1970s, even NASA would allow things to fall from orbit, since the odds were against it reaching an inhabited place on Earth. After all, the planet is more than 70 per cent water.

However, that all changed after the de-orbit of the 77-tonne U.S. space station Skylab in 1979. Some pieces, both large and small, ended up reaching the ground — the most famous being part of an oxygen tank that fell to the ground in Australia's outback.

"It's the only thing over 10 tonnes that's been deliberately designed to re-enter uncontrolled, since the late '80s," said McDowell. "China's really going against what I think are established norms, at least for a space activity. And it's not clear why they made this design decision."

Tianhe weighs 22 tonnes. The rocket is 32 metres long and five metres in diameter. And while it's mostly an empty tank, it does have large rocket engines on one end. In there, there are long, thin metal rods that were part of the fuel delivery system. It's these rods — because of their shape — that could withstand burning up on re-entry. That's what made it to the ground in the Ivory Coast with the other Long March 5B in 2020.

At the time of writing, The Aerospace Corporation, an independent, non-profit research organization in California, predicted re-entry time for the spent rocket — which has been designated CZ-5B/2021-035B — is May 9 at 12:37 ET, with an error of margin on either side of roughly 28 hours.

The European Union Space Surveillance and Tracking also said that they are tracking the debris and will update its orbit in the coming days.

Because it is uncontrolled, the exact timing and location for re-entry remain largely unknown.

Typically, most debris re-entering Earth's atmosphere burns up. But if it's big enough, it's likely that some may reach the ground or ocean.

Some people may remember that a rocket stage from a SpaceX launch burned up as it re-entered Earth's atmosphere last month. It was seen across Vancouver and Washington state. Some debris managed to make it to land, and that was just a three-tonne rocket stage.

"This is a much larger stage, so the probability of debris reaching the surface of the Earth is much higher," McDowell said.

Still, the odds of anyone being hurt by space debris are extremely low. In all of space launch history, there has never been a death from such an incident.

"I would say, you know, don't worry about it: This is not something for you for an individual to worry about, because the chances of you getting hit by some something falling out the sky somewhere on Earth [are] pretty slim," McDowell said.

"But it should be a concern for space agencies and space lawyers and so forth about how we go forward. Avoiding casualties from from space debris or property damage from space debris, how we handle this, how we recommend that the larger objects really not be allowed to re enter in this way."