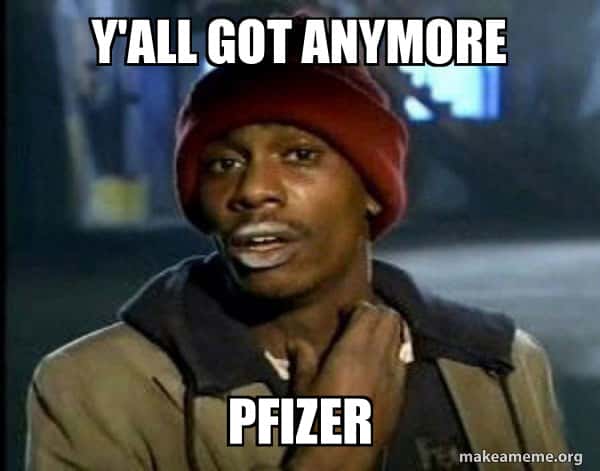 Yesterday, Pfizer released a strong earnings report (surpassing Wall Street’s elevated projections), and also revealed that it’s both on the cusp of securing regulatory approval in the US for minors between the ages of 12 and 15 to receive the vaccine (setting off another wave of demand as the Biden Administration heaps pressure on states to get their vaccination numbers up).

During a call with analysts and reporters, CEO Albert Bourla revealed that Pfizer is in talks with “basically all the governments of the world” about providing shots and booster shots through 2024. The key number is that Pfizer expects sales of its coronavirus jab to hit $26 billion by the end of this year, a milestone that would make the vaccine the company’s biggest-selling pharmaceutical product, eclipsing Humira, the popular rheumatoid arthritis drug made by Abbvie. Also, Pfizer said it intends to use its mRNA technology underpinning its COVID-19 jab for other therapies and vaccines. For example, the company is working on creating seasonal flu shots using the same RNA lipid nano-particle technology.

Bourla has already primed the public to expect to receive at least one additional shot within a year of their second dose, while also teasing the likelihood that the world might require annual booster shots – something that would be a boon to Pfizer’s bottom line as it moves to grow its COVID-19 vaccine division into a major, and permanent, line of business.

To help make its product more durable (and thus increase demand in poorer countries) the company said it is studying whether doses could be stored at standard refrigerator temperatures. Regardless, Bourla expects “durable demand” for vaccines, similar to the flu vaccine. “It is our hope that the Pfizer-BioNTech vaccine will continue to have a global impact by helping to get the devastating pandemic under control and helping economies around the world not only open, but stay open,” Bourla said in prepared remarks. That’s bad news for the rag-tag band of emerging-market economies pushing a proposal at the WTO to waive IP rights when it comes to vaccine technology.

If Washington were to back such a move, it would supercharge the “open vaccine” movement, and represent a major threat to Pfizer’s latest profit stream. That effort is being led by India and South Africa, yet Bill Gates and Washington lobbyists have continued to insist that respecting IP and letting Big Pharma handle global distribution (as Covax dramatically lags expectations), which means the status quo is likely safe. Even as WHO chief Tedros Adhanom Ghebreyesus decries a “shocking imbalance in the global distribution of vaccines” and calls for more efforts to fortify the WHO’s Covax programs and speed up delivery to poorer nations, Pfizer appears to be more focused on building out its latest profit stream.

President Biden said Tuesday that while he had yet to make a decision on whether to support a vaccine waiver, the US was already moving “as quickly as we can” to export doses. Pfizer’s earnings were so strong, they helped lift shares of vaccine makers on the other side of the world. Shares of some Asian vaccine makers with deals to distribute Pfizer’s jabs on the Continent rallied in sympathy with Pfizer. India’s Pfizer Ltd., a unit of Pfizer, rallied 4.9%, on Wednesday while Dr Reddy’s and Cadila Healthcare rallied as much as 2.7% and 5.9%. Looking ahead, CNN reported Wednesday that the FDA will approve the Pfizer-BioNTech COVID jab for use in 12 to 15 year olds as early as next week.

Data released by Pfizer recently purported to show that the jab is 100% effective at preventing serious symptoms. According to recent media reports, Pfizer is also seeking approval for the vaccine to be used on children as young as 2 and as old as 11 in both the US and Europe, an authorization it expects to arrive in September.