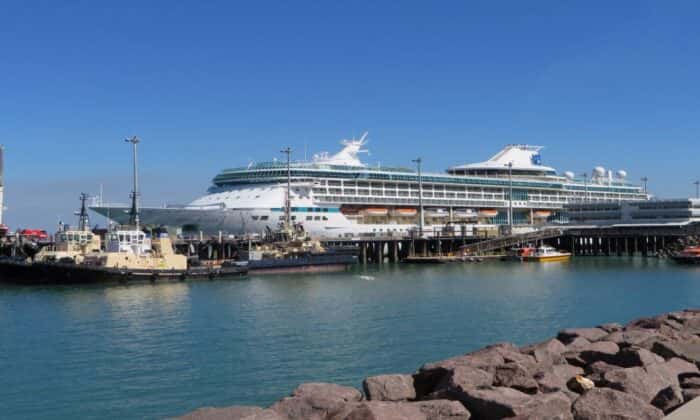 Liberal Senator Eric Abetz has welcomed a review into the Port of Darwin’s 99-year lease to a company with strong ties to Beijing and the Chinese Communist Party (CCP), saying it was a “serious mistake that must be rectified.”

This comes amid tense relations between Canberra and Beijing, which sharply declined after Australia called for an inquiry into the origins of COVID-19 and implemented measures to protect its national interests, including reviewing the port lease.

Speaking to Seven Network on May 4, Prime Minister Scott Morrison reiterated his stance from last week that the federal government may take action on the Port of Darwin, but only upon the advice of the Department of Defence.

“I’m not jumping to the next step,” Morrison said. “This is a matter for our security and defence agencies to advise if there’s been any change in the security status of those port arrangements.”

Two days earlier, The Sydney Morning Herald reported on May 2 that Defence Minister Peter Dutton had confirmed that the National Security Committee of Cabinet asked his department to “come back with some advice”, and he said that “that work is already underway.”

As chair of the Senate’s Foreign Affairs Defence and Trade Committee, Abetz said the review was vital and overdue.

He questioned how the Department of Defence and its former Secretary Dennis Richardson allowed the Port of Darwin to be leased to Landbridge Industry Australia, a subsidiary of the Chinese company Shandong Landbridge Group.

“It is unfathomable why the port was leased to a company whose billionaire owner was named by the Chinese Government in 2013 as one of the top 10 ‘individuals caring about the development of national defence’, and the company was later found to have extensive links to the CCP and the People’s Liberation Army,” Abetz said.

“The CCP would never let a foreign nation interfere with their ‘internal affairs’ with the purchase of such a piece of infrastructure that is so militarily, economically, and strategically important to the nation, yet DFAT inexplicably thought this was in the nation’s interest.”

According to a leading Australian strategic policy think tank, Beijing has sought to project power across the oceans, which involves seeking to control ports via state-owned enterprises.

In a report by Charlie Lyons Jones titled “Leaping Across the Ocean” (pdf), the Australian Strategic Policy Institute (ASPI) identified the three Australian ports in Brisbane, Melbourne, and Sydney as a potential part of this strategy.

Jones warned the federal government that Beijing viewed these locations as “strategic strong points” where China can use civilian control to establish economic gain and military dominance in the Indo-Pacific region.

“From the Greek Port of Piraeus, sold to the Chinese state-owned enterprise COSCO for a 51 per cent stake, Hambantota Port in Sri Lanka, ceded to the Chinese Government—along with 15,000 acres of surrounding land—for 99 years, or the Port of Doraleh in Djibouti, which is now buttressed by China’s first overseas military base, China has a consistent record of buying ports in vital shipping areas and using their economic leverage to extract military and strategic advantages,” Abetz said.

The move to review the Port of Darwin comes after the federal government intervened to cancel two Belt and Road deals the Victorian statement government had in place with Beijing. These deals were found to be inconsistent with Australia’s national interests, so Foreign Minister Marise Payne exercised powers under the Foreign Relations law to terminate them.

Experts and politicians around the world have labelled Beijing’s Belt and Road deals as means for the CCP to expand its influence globally.

“Given the new powers of the Federal Government under the Foreign Relations Bill, it is a timely and appropriate decision from Minister Dutton to consider all investments and the purchase of critical assets by foreign nations that have the potential to subvert our national interests and security.”