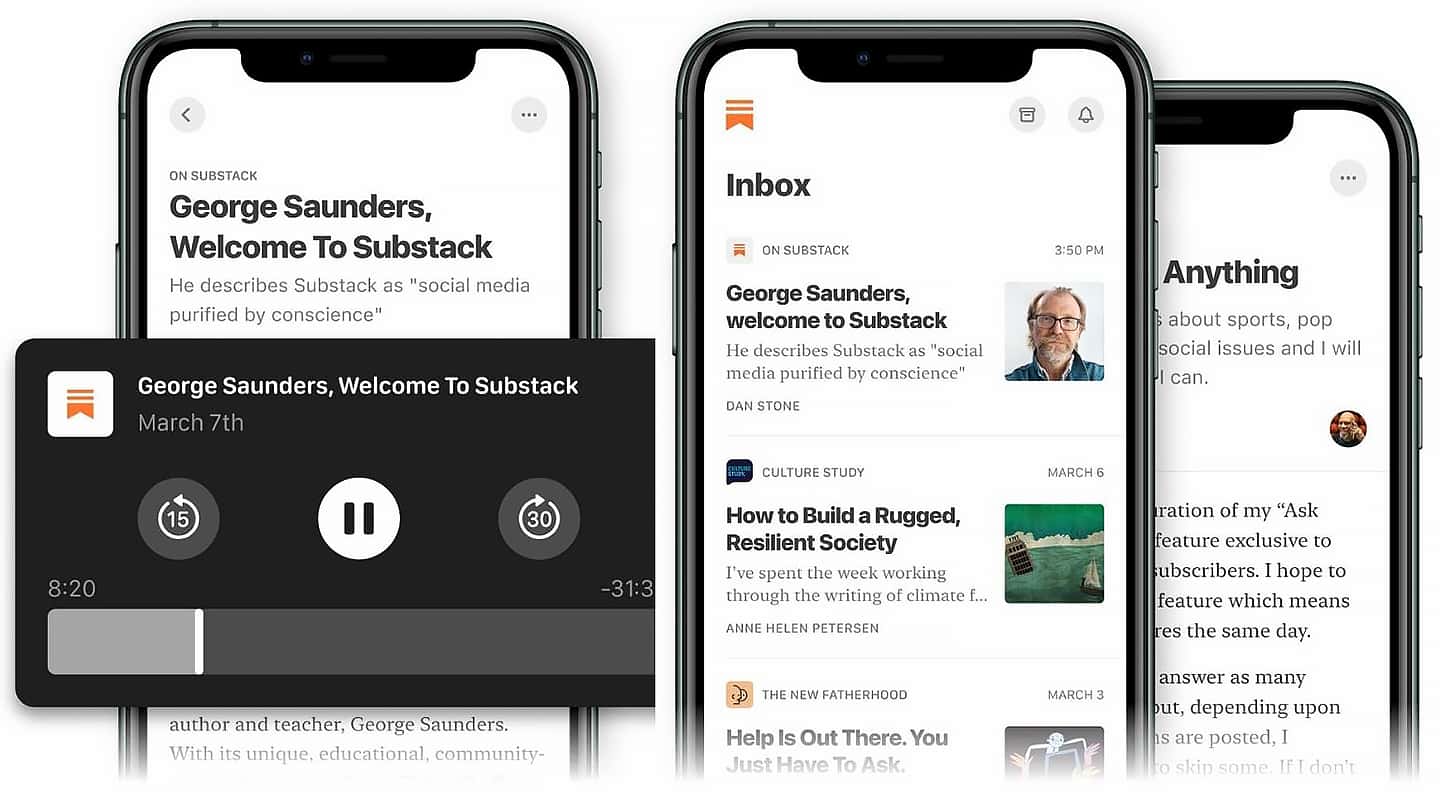 Substack has been the home of several writers who have gone their own way and cut ties with the legacy organizations they previously worked for after facing censorship and much else.

The company has now launched a new reader app, allowing users to read newsletters from their favorite writers in one place. For now, the app is only available for iOS users. However, an Android version is coming soon.

The Substack reader app puts all your newsletter subscriptions into an inbox. Video and podcast subscriptions are also available in the app, as well as comment sections and RSS feeds.

“The app helps bring together Substack as an ecosystem, giving you an icon to tap on your home screen that opens up a treasury of quality work by the writers you most trust,” the company,” the company said while making the announcement.

The app also allows users to discover new publications. Alongside the inbox tab is a “Discover” tab, where users can find suggestions classified by categories, such as politics, entertainment, and culture. In the “Discover” tab, there is a featured section called “this week” where users can find newsletters by Bari Weiss, Pati Smith, Glenn Greenwald, and other popular writers.

The app is dedicated to readers; writers cannot post using the app. But Substack claims it also benefits writers, by helping them grow their audience, for example.

Readers cannot make payments through the app (likely because Substack wanted to avoid Apple’s 30% cut for in-app purchases). To pay a subscription fee, the app will redirect you to the web through a link on the writer’s page.

Why Are Writers Fleeing Substack for Ghost?

The publishing platform is gaining traction as a newsletter alternative. But the comparison isn't so simple.

THIS PAST MARCH, poet and critic Yanyi was very busy. Between teaching at Dartmouth, editing a literary journal, preparing a forthcoming book, and running a creative advice newsletter called “The Reading,” his schedule was stuffed. Still, he decided to add one more task: pull “The Reading” off of Substack by the end of the month. “It was right before the Trans Day of Visibility,” he says, “and I thought it was important for me to make the switch that day.”

Yanyi had agonized over the decision to leave the newsletter publishing startup. Substack’s platform was easy to use, and he’d been granted an advance as part of the company’s fellowship program, allowing him to grow a healthy, engaged audience. But he was too unhappy with Substack’s moderation to stay. The platform had permitted content from writer Graham Linehan that Yanyi saw as anti-trans and in violation of Substack’s policy. He wasn’t the only unhappy one; other high-profile Substackers announced their decisions to leave for this reason around the same time. Many in the exodus had a similar destination: Ghost, a nonprofit publishing platform that bills itself as “the independent Substack alternative.”

Frankly, this designation is a bit odd. Even though Ghost has been openly courting defectors—the company has a concierge service to entice writers looking to switch—it’s not exactly a one-to-one Substack substitute. Newsletters are Substack’s core product. Not so for Ghost, which was originally envisioned as a snazzier version of WordPress when it was funded through a Kickstarter campaign in 2013. Unlike the VC-fueled Substack, Ghost is a bootstrapped affair, with a lean staff of two dozen scattered around the globe.

The business models of Substack and Ghost are also completely different. Rather than take a cut of subscriber revenue like Substack, Ghost’s paid hosting service, Ghost Pro, takes a fee, starting at $9 a month. (The figure varies depending on how many readers a publication has.) Its free-spirited CEO and cofounder John O’Nolan, who uploaded videos of his nomadic lifestyle to YouTube for many years, is currently camped out in Florida. With no investors, he feels no pressure to scale up quickly. Ghost has definitely grown since 2013—its paying customers include Tinder and OkCupid, so there’s a chance you could get ghosted on a dating app that uses Ghost, and its software has been installed more than 2.5 million times—but the nonprofit simply isn’t trying to operate with the same never-stop-scaling! mindset that guides so many digital-media startups flush with Silicon Valley cash.

Why, then, did Ghost become the go-to for people looking to abandon Substack? When asked, writers who made the switch had a few answers for why no-moderation Ghost is seen as more virtuous than light-moderation Substack. For starters, Ghost’s nonprofit status gives its reputation a squeaky-clean shine. But more important, Ghost knows what it is and what it is not—and it’s not a publication.

The Situation at Chernobyl Is Deteriorating

Of Course We’re Living in a Simulation

How a Plucky Robot Found the Long-Lost Endurance Shipwreck

How a New Digital Dollar Could Shake the US Financial System

One of the main reasons Substack has received so much blowback is because of Substack Pro, its program that pays well-known writers eye-popping sums to create newsletters. To be clear, Linehan is not one of these writers. Still, the existence of this program suggests to many critics that Substack, whether it will admit it or not, is a publisher as well as a platform. Paying writers is, after all, an editorial choice. “Substack has staked out a stance on moderation,” says progressive political consultant Aaron Huertas, who recently moved his writing from Medium to Ghost. “If you’re going to have a policy, you should actually enforce it.” (Asked to comment, a Substack spokesperson said, “Advances have nothing to do with particular viewpoints or moderation decisions. We’re strong supporters of a free press and the open exchange of ideas, so we don’t influence anyone’s writing and we take a light touch with moderation.”)

Ghost, which does not pay any of its writers or attempt curation, doesn’t occupy the same gray area between platform and publisher that Substack does. So new converts don’t necessarily expect it to behave in the same way they wanted Substack to behave. “The way Ghost works is different from the way that Substack works,” Yanyi says.

Ghost’s cofounder agrees. O’Nolan sees Substack as much closer in spirit to the publishing platform Medium. Since launching in 2012, the company has served as both a blog host and a home to its own publications and stable of authors. By paying writers, O’Nolan sees Substack as following Medium’s playbook. “I think it very strongly changes the position you can take on neutrality and content moderation when you're funding certain content, and particularly when you’re hosting it on one single website, which of course they are doing.”

While the Substack moderation controversy ended up raising Ghost’s profile, plenty of writers are now switching to Ghost for other reasons. Like financial ones. Uri Bram, the publisher of popular newsletter “The Browser,” says Ghost has a “better product for 10 times less money” than Substack. For writers who want more control, Ghost’s customizability is key to its appeal. Isabelle Roughol, another recent Substack-to-Ghost migrant, likes how Ghost allows her more control over the finished product for her podcast and website Borderline. Using Ghost “requires a bit more technical know-how but is totally manageable,” she says. “I built a self-hosted WordPress site in the glory days of blogging, and it's pretty similar.”

But it’s important to emphasize the need for some know-how. Again: What Substack offers and what Ghost offers just aren’t all that comparable. Another member of Yanyi’s Substack Fellows class, the college-sports reporter Matt Brown, recently moved his newsletter “Extra Points” from Substack to Ghost, using Ghost Pro. He has found the migration process a bit more challenging, calling it a “mixed bag” so far. He has hopes it’ll all be worth it in the end but hasn’t found the switch as seamless as he’d imagined. “The best way to describe it, I think, would be like switching from Mac to Linux,” he says. “If you know what you're doing, Linux could do anything, but the command line is scary, you know?”

A number of new Ghost-adjacent services have recently cropped up to help people who like the idea of Ghost but who don’t necessarily want to take up coding. For example, Outpost, which was created by former WIRED editor Ryan Singel, is a media co-op built on top of Ghost, offering hand-holding for writers and publishers who like the idea of Ghost but not the whole DIY element. According to veteran investigative journalist David Sirota, this type of service can still save money. After he migrated his indie newsroom The Daily Poster from Substack to Ghost using Outpost, he found paying for both services was the better financial choice than Substack’s revenue-sharing model. “We have substantially reduced our overhead costs to the tune of at least 50 percent,” he says.

Controversies fade, but Ghost has a promising future even if it runs out of Substack writers to convert. The nature of its slow-and-steady, independent project means that it stands an especially strong chance of being around the next time another publishing startup pisses people off. And by studiously avoiding any behavior that could get it pegged as a publisher, it may be able to sidestep future debates about moderation. Also, the appeal of durability in digital publishing cannot be overstated—most of us who have been on the internet for decades know how often one-time big-shot platforms fade away and shutter, leaving their users scrambling to preserve a record. Although it’s named after a single phantom, Ghost’s real appeal lies in the fact that it has not yet disappeared.