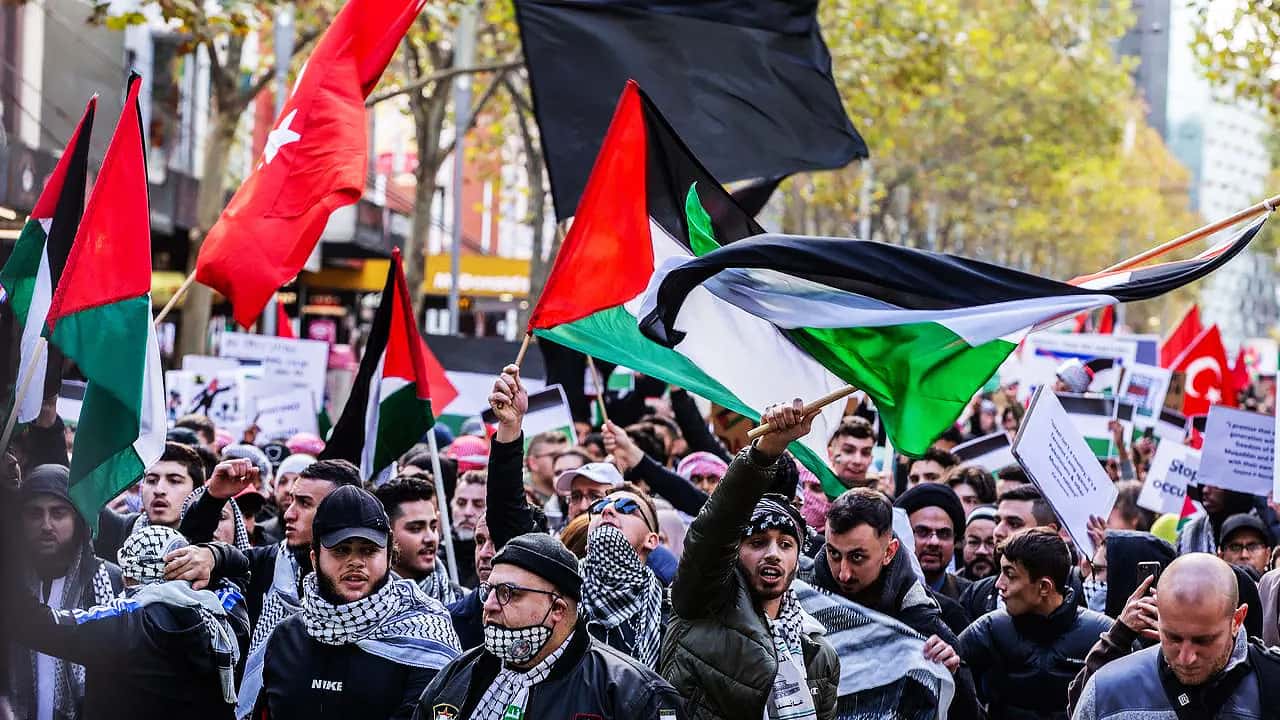 Protesters in Australia have joined rallies around the world against Israeli military attacks in Gaza, where fighting continued for a fifth night

Jeanine Hourani has been attending protests calling for freedom for Palestine since she was in a pram.

“I always joke that as Palestinians we learn too much before we learn to walk,” she laughed.

But even still, she said Saturday’s protests were different.

“I’ve been going to these things my whole life and I honestly don’t remember seeing such an incredible or significant turnout as I did today. We were there in the thousands and it was just really, really incredible to see.”

Hourani was an organiser of the Free Palestine rally in Melbourne, joining hundreds of coordinated demonstrations around the country and the world, protesting against Israeli military attacks on the Gaza Strip. It came as the two nations experienced the most violent outburst of tensions since 2014, with at least 132 killed in Gaza and eight killed in Israel since Monday.

Israeli planes renewed airstrikes in Gaza on Saturday and Hamas militants in Gaza responded by firing rockets into Israel as their battle entered a fifth night.

In recent days Australian and Palestinian human rights groups have urged the Australian government to stop pursuing a potential free trade agreement with Israel and condemn its actions in Gaza and East Jerusalem.

The protests mirrored these demands, and went further, urging the government to enact boycott, divestment and sanction actions against Israel, similar to those used against South Africa during the apartheid era.

Many at the Australian rallies spoke of Israel committing apartheid – a view supported by Human Rights Watch and B’Tselem, a Jerusalem-based human rights group, but vehemently disputed by several Australian Jewish associations such as the Anti-Defamation Commission.

Randa Abdel-Fattah, a writer and prominent Palestinian activist, was one of around 5,000 people who attend a rally at Sydney Town Hall. She said access to social media had been a driving force in the growing support in Australia.

“I think there are two things that are happening … you have social media now and you have the videos you have in real time. The bombs on buildings and Palestinian children being pulled out of the rubble; fathers and mothers screaming in morgues. It is happening in real time, the evidence is there,” she said.

“There’s a new generation as well that we can really see on TikTok and Instagram … They are seeing what’s happening.”

During Abdel-Fattah’s speech at the rally, a man scaled the side of the Town Hall, standing on the roof below the clocktower and waving a Palestinian flag.

A young girl attended the rally with her parents holding a sign that said “Israel is killing children like me”, as the large crowd chanted “From the river to sea, Palestine will be free”.

“It felt different this year,” Abdel-Fattah said. “Usually that kind of crowd would energise me and give me hope. And while I definitely felt some level of invigoration by how many people were there, I also felt just the weight of what is happening.

“Knowing that as I was speaking literally Palestinians were being bombed – the dissonance between that … it’s really, you know, taking its toll,” she said.

“I see an uprising,” said a protester in Sydney, Walla Abu-Eid. “I see people who are no longer going to remain silent. People who are fed up, people who are responding to oppression and violence by standing up for themselves.”

There were no reports on Saturday night of arrests or misbehaviour at either of the day’s protests.

Dr Dvir Abramovich, the chairman of the Anti-Defamation Commission, which aims to end antisemitism and other forms of hate speech in Australia, confirmed that so far no complaints had been lodged with his organisation over the Free Palestine rallies, but noted as the Sabbath had just ended some could still filter in.

He said he was concerned, however, that rhetoric could escalate into anti-Jewish hate.

“While everyone is entitled to harbour strong opinions about the escalating
conflict between Israel and Hamas and express them in public, we would be
alarmed if the moral guardrails came off and those views crossed the line
into antisemitic rhetoric that not only made Jews in Australia feel unsafe
but drove a wedge between communities,” he said.

“Over the last few days, the ADC has been concerned about the high volume of online hate that has been circulating on the local social media scene, targeting especially young Australian Jews.”

Abramovich said his organisation believed accusing Israel of genocide or labelling it an apartheid state would cross the line.

“In fact, to charge Israel with promoting the vile racial policies promulgated by the former South African government is a slur that has no basis in reality and does not contribute to a thoughtful and respectful dialogue with people across the political divide … We all have a duty to maintain respectful dialogue and to ensure that despite our differences we do not destroy the mutual civility and affection that we hold for each other as fellow citizens.”

Earlier this week, Australia’s foreign minister, Marise Payne, urged an end to the violence. Payne said the government was deeply concerned about escalating unrest in Israel, Gaza and the West Bank.

“We’ve unequivocally called on all leaders to take immediate steps to halt violence, to maintain restraint, and to restore calm,” she said at a press briefing in Washington on Friday.

It followed the prime minister, Scott Morrison, on Thursday restating the government’s policy of a two-state solution between Israel and Palestine, describing Australia as an agent for peace. He urged Australians with ties to the conflict to act with tolerance and respect.

“By all means, people can have concerns and views, and there is a tolerance for that, but at the same time we do not want to import the troubles of other parts of the world into this country,” Morrison said.

With additional reporting from Australia Associated Press and Reuters.