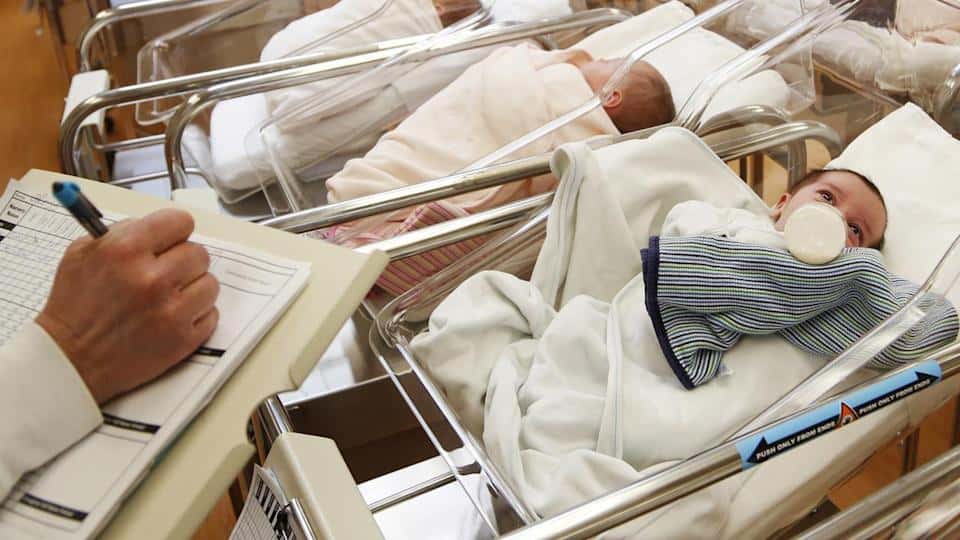 A little over a week ago, we reported on one of the biggest deflationary threats looming over the global economy: that is, China’s shrinking population, as deaths outpace births for the first time, a trend that demographers believe will only worsen as the impact of China’s one-child policy is felt on its population numbers.

As Wall Street banks and America’s largest corporations complain about growing inflationary pressures  in their sell-side research and earnings calls, the latest population update from the CDC has just confirmed that the deflationary trend of a falling birth rate continued last year in the US. In fact, one could argue this trend has been supercharged by the pandemic, thwarting theories about a lockdown “baby boom” as the number of births in the US fell by 4% in 2020, dropping to the lowest level since 1979. Put another way: thanks to the pandemic, US birth rates have fallen to their lowest level in a generation.

Birth rates dropped across every race, ethnicity and age group – even teenagers (though teenage birth rates have been falling in the US for decades), according to the data, which was published by the CDC’s National Center for Health. As we noted at the time, a shrinking population is bound to create serious challenges for China’s debt-fueled economy.

It’s one reason to doubt President Xi’s propaganda about China being “on the rise” globally. Still, declining birth rates are a problem across the developed world, and the US is no exception. The provisional data for 2020, at 3.6MM births, marks the 6th annual drop in a row. The decline will likely continue in 2021, when the brunt of the impact from the pandemic will be recorded, but with a nine-month delay. Bloomberg suggested that fears of contracting the virus while pregnant, or while in hospital to give birth, combined with job insecurity and government measures limiting social contact and business activity, dissuaded Americans from having babies, according to surveys by Ovia Health, a women’s health technology company.

“There are several factors that go into family planning, and an entire ecosystem of support that enables and empowers parents and parents-to-be,” said Paris Wallace, chief executive of Ovia Health. “In 2020, nearly all of those factors were turned on their head, and many of those support systems came crashing down.” While birth rates fell for women in all age groups between 15 and 40, the declines were steeper in states that were hit the hardest by COVID-19, such as California and New York. And the exodus from crowded urban centers exacerbated the drop in birth rates in places like NYC, where the constant shriek of ambulance sirens over the summer likely made it difficult for couples to get in the mood. Interestingly, many pregnant couples in the city fled to give birth elsewhere (well, at least those who could afford to do so).

Here are some other key findings courtesy of Bloomberg. Births in Florida surpassed those in New York last year — by just 440. It’s still significant given that the differential in favor of New York was about 1,500 and 5,000 in 2019 and 2018, respectively. Fewer than 10,000 babies were born in Alaska, Vermont, Washington D.C., and Wyoming in 2020. The number of births fell 3% for Hispanic women, 4% for both non-Hispanic White and non-Hispanic Black women, and 8% for non-Hispanic Asian women.

To sum up, a declining birth rate leaves the US with two options: either increase the inflow of immigrants, or risk a blowout in the per-capita level of America’s exploding debt.

A strange link has been made between the sterilization of wild horses and the Covid-19 vaccines. Vaccination against the porcine zona pellucida (PZP) is designed to contain the wild horse population by generating antibodies that prevent the mares from producing fertile eggs.

The pharmacological effect of the vaccination does not occur right away, but gradually over a period of 2-6 weeks, similar to the Covid vaccines from Moderna and Pfizer, and requires subsequent booster vaccinations.

“The zona pellucida (ZP) is a glycoprotein membrane that surrounds all mammalian eggs. Certain proteins in the membrane serve as the sperm receptor. The contraceptive vaccine produced by the SCC uses the ZP from the pig, thus the name porcine zona pellucida (PZP).

“Briefly, the PZP is produced by a complex process whereby the ZP is removed from the ovum, its glycoproteins extracted, isolated, and converted into a vaccine. The vaccine stimulates the target animal to produce antibodies, which attach to its own ZP, thus blocking fertilization and causing contraception.

“The PZP vaccine is usually given, initially, in a series of 2 vaccinations 2-6 weeks apart and then a booster every 8 months to a year, depending on the species. The PZP is emulsified with an adjuvant to stimulate the animal’s immune system.” It is extracted from the ovaries of pigs which is used as a source of antigens for immunocontraception.

Porcine zona pellucida has been used in wildlife contraception since the late 1980s. Animals with which PZP has been employed in this context include elephants, wild and/or feral horses, elk and white tailed deer. It can be administered to captured animals via a standard syringe or administered to free ranging wildlife with a dart gun. The initial contraceptive effect last for approximately one year in horses.

From animal reproductive health to people?

Coincidentally, Pfizer’s CEO Dr. Albert Bourla, is a trained veterinarian. He is a Doctor of Veterinary Medicine and holds a PhD in the Biotechnology of Reproduction from the Veterinary School of Aristotle University in Greece.

From 2014-16, Bourla served as group president of Pfizer’s global vaccines and oncology. “He was instrumental in building a strong and competitive position in oncology and expanding the company’s leadership in vaccines,” according to his biography.

Many researchers warn of sterility associated with the jabs

A peer reviewed study has incidentally warned against taking the shot when pregnant while other studies have highlighted the toxicity of the shots in terms of reproductive health.

Dr. Elizabeth Lee Vliet stated during the second Stop the Shot online conference streamed on August 19 by LifeSiteNews that peer-reviewed scientific research from 2012 and 2018 as well as evidence from whistle-blowers showed that the jabs damaged fertility and pregnancy. It was not being reported to the public.

The vaccine nanoparticles “can pass through the blood-testis barrier, placental barrier, and epithelial barrier, which protect reproductive tissues,” she said.

Human immune cells are thus “trained to attack” a protein vital to a successful pregnancy, as in the case of PZP. Vliet warned that this would lead to “miscarriages, birth defects, and infertility” when taking the jab.

Dr. Michael Yeadon, a former vice president at Pfizer, has corroborated the claims, saying that the jabs pose a “severe risk” of infertility. Yeadon cited scientific research specifically on lipid nanoparticles, found in the shots. “Do not take these vaccines,” he warned. “There’s a severe risk to your ability to conceive and carry a baby to term.”

Although the research into nanoparticle toxicity was conducted on animals, Yeadon argued that humans were also mammals and therefore at similar risk. “If someone wants to persuade me that they’re not concentrating in human ovaries, they are going to have to provide me with some data,” he said.

The jab has also been correlated with thousands of reports of menstrual irregularities. Gynecologist Christiane Northrup warned in April this year that the Covid vaccine could cause infertility in women, because the protein Syncytin-1 present in the placenta was very similar to the Covid virus SARS-CoV-2’s spike protein.

DESPITE WHAT THE FACT CHECKERS ORIGINALLY CLAIMED.

Anew study analyzing the impacts of Pfizer’s COVID-19 vaccine on sperm count showed that men receiving the jab suffered a sustained loss in sperm count. The news comes after years of mockery by corporate media outlets over the concern, as well as false “fact checks” by outlets with direct links to vaccine manufacturers.

The concerning findings were published in an Israeli study – To Investigate The Effect of COVID-19 BNT162b2 (Pfizer) Vaccine on Semen Parameters Among Semen Donors – published June 17th, 2022.

The study explored concerns about the “possible detrimental impact on male fertility” as a result of the COVID-19 vaccine, with researchers concluding:

While researchers described the effects as “temporary,” the study’s cross-tabs show that after 150 days sperm concentration was nearly 16 percent lower than men’s baseline and that total motile count (TMC) was nearly 20 percent below.

The effects were strongest in these two variables, as the table below demonstrates. The research used four data points to form their comparisons: T0 was a baseline count; T1 was 15 to 45 days post-vaccine; T2  was 75 to 120 days post-vaccine, and T3 was 150 days or more post-vaccine.

For sperm concentration, even six months post COVID-19 vaccine, study participants still were an average of 15.9 percent lower than their original baseline. For TMC, the count was still 19.4 percent lower than the baseline, despite recovering roughly three percentage points from the time period before.

“Systemic immune response after BNT162b2 vaccine is a reasonable cause for transient semen concentration and TMC decline,” reasons the study, which found that the parameters of semen volume and sperm motility appeared to not be similarly impaired.

The study comes amidst concerns that the COVID-19 vaccine also has detrimental effects on female reproductive organs, with a recent National Institutes of Health study confirming the phenomenon despite mainstream media outlets and fact-checkers dismissing the notion as a conspiracy theory.

Global sperm counts in men have been declining for decades now, with researchers blaming pollutants, plastics, food additives and preservatives, lack of exercise, and other factors. Numbers in North America, Europe, Australia and New Zealand declined more than 59 percent between 1973 to 2011, according to a 2017 study.