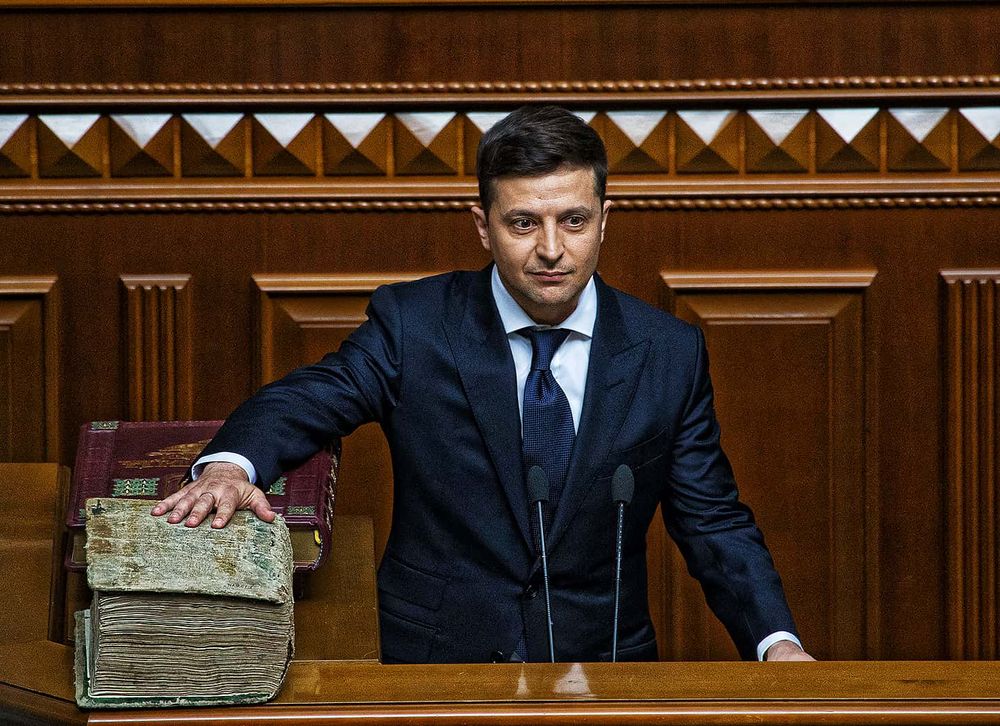 He was the comic from Ukrainian TV who implausibly became president.

But Volodymyr Zelensky is now heading a nation under attack, after Russia invaded Ukraine early Thursday despite weeks of diplomatic wrangling to avoid the worst-case scenario.

The fresh-faced 44-year-old became president of Ukraine in time to witness the gravest standoff between the Kremlin and Western powers since the end of the Cold War more than three decades ago.

He watched Russia surround his country with more than 150,000 soldiers, despite calls from Washington and others to back off.

He watched as Russia declared two rebels held republics in the east -- Donetsk and Lugansk -- independent, a dramatic escalation of the standoff.

And then on Thursday, he watched as Russia launched an all-out attack, with explosions heard across the country in the early morning hours after Russian President Vladimir Putin confirmed a "military operation".

Zelensky quickly implemented martial law and appealed to his Western allies, calling for European unity after speaking with US President Joe Biden and France's Emmanuel Macron.

Zelensky ran for president seemingly as a joke in 2019.

He was catapulted to fame by playing a foul-mouthed school teacher on TV who became president after one of his students filmed his profane rant against corruption and posted it online.

The evening comedy show became a huge hit just as the country was gripped by cataclysmic change.

Ukraine's 2014 pro-EU revolution ousted a Kremlin-backed leader and brought in a new team that had to grapple with a spiralling conflict in the east and an economy teetering towards collapse.

Ukrainians watched the president on the comedy show make crude jokes to his wife and pedal to work with a startled look of panic.

It captured the zeitgeist -- and made Zelensky a small fortune.

He defeated Petro Poroshenko -- an incumbent mired by crises on all sides -- in a runoff by winning more than 70 percent of the vote.

But some Ukrainians braced for the worst. His critics compared him unfavourably to celebrity politicians such as Italy's Silvio Berlusconi and then US president Donald Trump.

His early decision to fill his team with members of his Kvartal 95 TV production company did little to build public confidence.

"I think our international partners have a fairly difficult time dealing with him. He is not on their level," said Ukrainian political analyst Mykola Davydyuk.

"They are playing at a very high level that he cannot reach -- and cannot understand."

But some Western diplomats appear taken by his charm.

"He hasn't done that bad, to be honest," one diplomat said this month, ahead of Russia's attack.

"He has an impossible job. He is stuck, under pressure from both the Russians and the Americans," the diplomat said.

"He has shown composure."

The standoff with Russia over Ukraine's dream of joining NATO -- aspirationally written into the constitution -- will define Zelensky's presidency.

He came to power attempting to open lines of communication with Putin that could finally resolve the bloody separatist conflict that claimed more than 14,000 lives when Russia invaded.

The two held a Parisian summit a few months after Zelensky's election that Putin hailed as an "important step".

But Zelensky read from a different script at his own post-summit media event.

"My counterparts have said it is a very good result for a first meeting. But I will be honest -- it is very little," he said.

Relations between the two men have been deteriorating ever since.

Putin accused Zelensky's government of "discriminating" against Russian-speakers and reneging on past promises for settling the eastern conflict.

Zelensky's offer of a three-way summit with Putin and US President Joe Biden fell on deaf ears in Moscow last month.