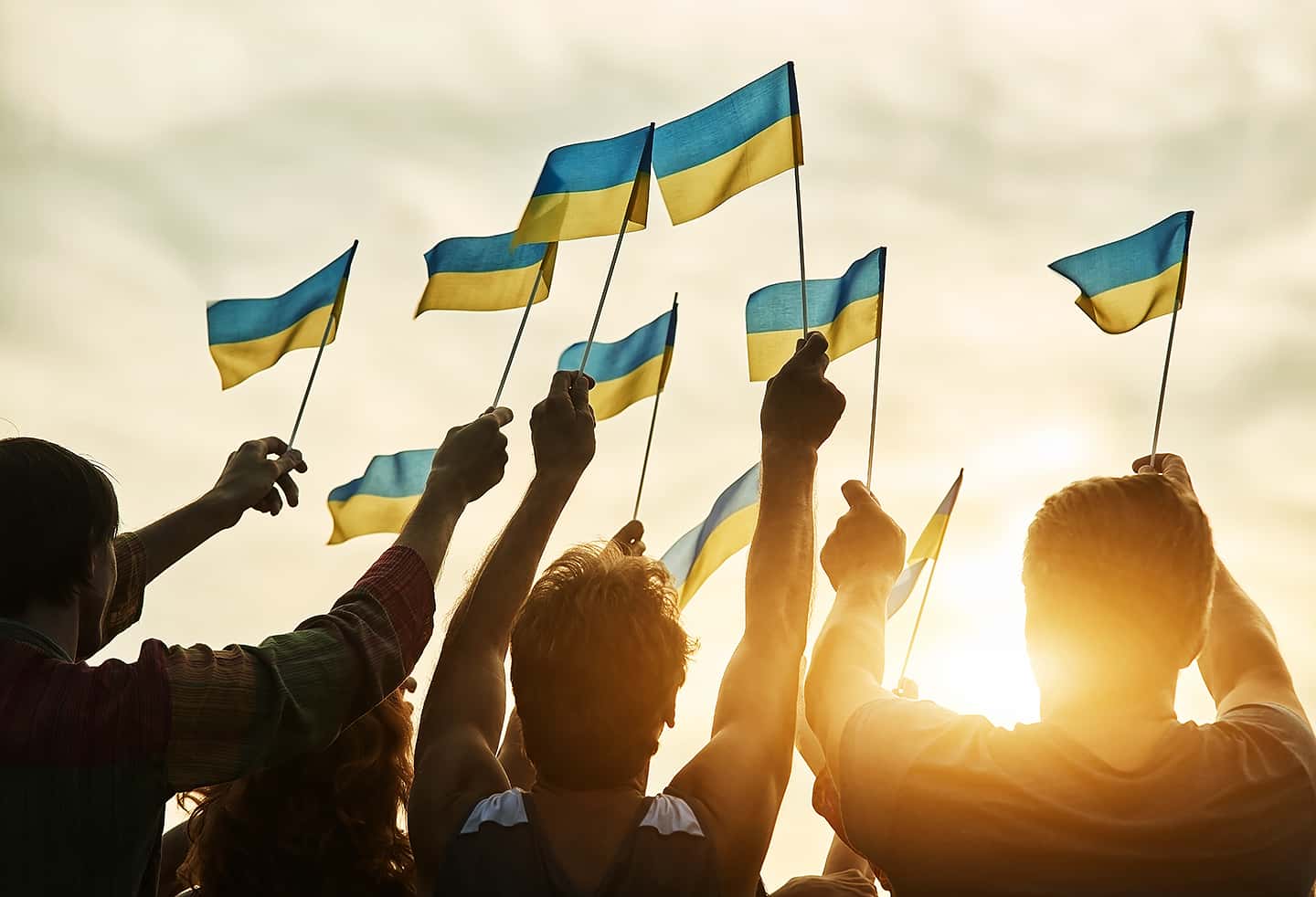 As the humanitarian situation in Ukraine declined, UN officials briefed the Security Council on 7 March.  Vasily Nebenzya, the Russian Federation Permanent Representative, argued that safety for civilians in Ukraine is not a problem for Russia, because “we are not bombarding them,” but rather it is the Ukrainian radicals and neo-Nazis who were holding civilians hostage in cities and using them as human shields, not allowing them to leave, despite the fact that there were humanitarian corridors.

As it has been in the past, “we think that UNICEF’s views should be based on reliable tried and tested information,” Nebenzya began, and asked the council to consider the dangers of the proliferation of “small arms and light weapons many of which have fallen into the hands of radical elements including those who have been deliberately freed from prison.”  An irresponsible step by Volodymyr Zelenskyy and the number of civilian victims at the hands of the radicals was increasing day by day, he noted.

“There is an information war going on, more likely a disinformation war, and we would say that in the West – in the free world – where Russian information resources are being turned off and where any information which contradicts your version of events is not allowed to be broadcast.”

He emphasised that safety for civilians in Ukraine was not a problem for Russians because Russians were not bombarding them but rather it was Ukrainian radicals and neo-Nazis who were holding hostage whole towns and cities and were making use of citizens as human shields.  They were not allowing civilians to leave cities despite the fact that there were humanitarian corridors and that Russian units had declared a ceasefire.

Nebenzya explained that an agreement was reached that on 5 March a humanitarian corridor would be opened from Mariupol but the radicals in Mariupol violated this agreement.

“A radio conversation that was intercepted between two commanders of the nationalist battalion Azov … the radicals there were told to shoot at the legs of those who were heading for the humanitarian corridors. Those who risked life and limb to try and leave Mariupol, when they reached the checkpoints to exit the city, were shot on site by Ukrainian Nazis. There’s a great deal of video evidence of this. In Mariupol alone there were some 200 000 civilians who are in the crosshairs of the of the forces there,” he said.

The Ukrainian Deputy Prime Minister Iryna Vereshchuk called the proposal to open humanitarian corridors towards Russia “absurd and unacceptable,” Nebenzya told the council, “it is clear to us that the Kiev regime is making use of all available and unavailable methods to wholeheartedly stop the exit of those citizens who wish to leave, and also foreigners who wish to go to Russia, because they’re scared that once these people are free they will tell the truth about the actions of Ukrainian radicals.”

He quoted a statement made that day by the Mayor of Sumy, Alexander Lysenko, together with the commander of the national battalion: “There will not be any green corridors. No civilians will leave to Russia and those who try to will be shot dead.”

“We are also particularly concerned that the Ukrainian radicals are continuing to hold hostage, as human shields, more than 1500 foreigners in a range of cities … we are shocked by news of the inhumane attacks by nationalists on student accommodation which has among other things caused the death of Indian students.”

Nebenzya pointed out that the cowardly practice of using the civilian population as hostages is “not just deeply immoral but also violates the norms of international humanitarian law including articles 57 and 58 of the first additional protocol to the Geneva Convention of 1949.”

On 23 March the Russian State Duma Deputy Artyom Viktorovich Turov made a statement saying a Military Tribunal needed to be created that would investigate cases of using civilians as a “human shield”.  You can watch the video, HERE.  The video is in Russian and although its description is in English, it is without English subtitles.  Below, we have copied the Russian transcript from YouTube and translated it into English using Google translate.

… and began with colleagues to collect video confirmation of the crimes that were committed over the battalions, finding everything under the guise of residents of certain settlements, not allowing them to go out through the culinary corridors and this is how. An example, I can tell the whole story of a nine-year-old boy who in one of their accommodation points in Novoazovsk told how their family was simply locked by locking the doors so that they could not leave their apartment in one of the districts of Mariupol and above their apartment in this time in a residential apartment also where people were located was placed a long time ago from the points of firing points of the Ukrainian armed forces. On all this data we will also record and transfer to law enforcement agencies which of course will necessarily investigate all this and we are sure that those criminals war criminals will be found convicted they are waiting for a military tribunal.

Additionally, a statement by Alexey Arestovich, shown in the video below, has been circulating on social media.  Although it’s not clear when the video was made, he states Russia strikes exclusively at military targets.  This is in total contradiction of Prime Minister Boris Johnson and President Joe Biden, wrote Terri Jackson, member secretary to Principia Scientific.

The caption accompanying the video states: “The only reason he is saying this is to keep people in the city – Kyiv – in their homes, around which the Ukrainian military positions are placed. As such, perpetuating the human shield tactics.”

If the clip of Arestovich’s statement is removed from YouTube you can watch it HERE.

Last week, in two of his reports – one on Monday and one on Thursday – Patrick Lancaster interviewed residents of Mariupol.  In Monday’s report residents described how civilians are being used as human shields and how only women and children are permitted through the humanitarian corridors, watch HERE.

In Thursday’s report residents describe how the majority of shooting was by Ukrainian forces and how the Ukrainians are placing their tanks near schools, kindergartens and in residential areas.

Ukraine’s cities – and civilian areas – have become the crucible of the war, wrote The Washington Post and quoted William Schabas, an international law professor at Middlesex University in London: “I am very reluctant to suggest that Ukraine is responsible for civilian casualties, because Ukraine is fighting to defend its country from an aggressor. But to the extent that Ukraine brings the battlefield to the civilian neighbourhoods, it increases the danger to civilians.”

Consortium News noted that according to Richard Weir, a researcher in Human Rights Watch’s crisis and conflict division, the Ukrainian military has “a responsibility under international law” to either remove their forces and equipment from civilian areas, or to move the civilian population from the areas where military personnel and equipment are being stored.

“If they don’t do that,” Weir said, “that is a violation of the laws of war. Because what they are doing is they are putting civilians at risk. Because all that military equipment are legitimate targets.”

The NATO narrative is that Azovstal – one of Europe’s biggest iron and steel works – was nearly destroyed by the Russian Army and its allied Donetsk forces who “lay siege” to Mariupol, Great Game India reported on Friday. Their report continued:

“The true story is that the neo-Nazi Azov battalion took scores of Mariupol civilians as human shields since the start of the Russian military operation in Ukraine, and retreated to Azovstal as a last stand. After an ultimatum delivered last week, they are now being completely exterminated by the Russian and Donetsk forces and Chechen Spetsnaz.”

On Sunday RT reported that graphic footage from Bucha, a town to the northwest of Kiev, emerged over the weekend, showing multiple bodies clad in civilian clothing scattered around. Kiev was quick to blame the Russian military for the incident, with Ukrainian Foreign Minister Dmytro Kuleba alleging it was a “deliberate massacre.” RT’s report continues:

“Top Western politicians were quick to back and amplify Kiev’s claims, with NATO chief Jens Stoltenberg branding the incident “a brutality against civilians we haven’t seen in Europe for decades.

“Moscow, however, has firmly rejected any involvement, accusing Kiev of staging the whole affair to frame Russian troops. The country’s Defence Ministry said Russian troops pulled out of the town on March 30, with the local mayor confirming this in a video address a day later without mentioning ‘any local residents laying shot in the streets’.

“The purported “evidence” of the incident emerged only four days after the withdrawal, when Ukrainian intelligence and “representatives of Ukrainian television arrived in the town,” the military added, stressing that multiple inconsistencies show that the affair “has been staged by the Kiev regime for Western media.”

Moscow will convene an extraordinary meeting of the UN Security Council over the incident in Bucha.